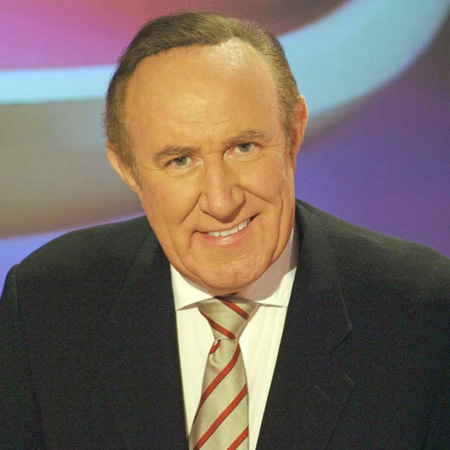 Andrew Neil is a high-profile British media mogul and broadcaster, who has had an illustrious career as a journalist, newspaper editor, publisher, and political advisor.

He is a mainstay presenter on BBC television in the area of current affairs, where he has built a formidable reputation for bringing leading politicians and political commentators to account through his style of interview. He currently presents Daily Politics on BBC2, Sunday Politics on BBC1 and This Week on BBC1.

Born in Scotland in 1949, Andrew read Economics and Politics at Glasgow University, and started out as a political advisor for the Conservative Party before joining The Economist in 1973, where he worked for 10 years as a correspondent, then American correspondent, and finally UK Editor.  During this time, Andrew became a familiar face on TV and Radio in both the UK and USA.

In 1983, Andrew became Editor of The Sunday Times where he presided over the launch of Sky Television as Executive Chairman. He left in 1994, after a well-documented fall-out with Rupert Murdoch, and published his memoirs in a book Full Disclosure in 1996.

Andrew is now Chairman & Editor in Chief of Spectator Magazines and Apollo International Art Mag, Chairman of ITP, (which publishes of over 60 magazines in the Gulf) and Chairman of World Media Rights, which produces documentaries for over 69 countries.

Speaker Topics:
As a widely acknowledged expert on British, European and American politics and business, Andrew is a popular choice as a keynote, after-dinner speaker and conference facilitator. With his finger on the political pulse, Andrew speaks on:

" Andrew Neil was both extremely interesting and engaging and was extremely well received by our guests. We have received countless communications of praise of his speech since our event. "