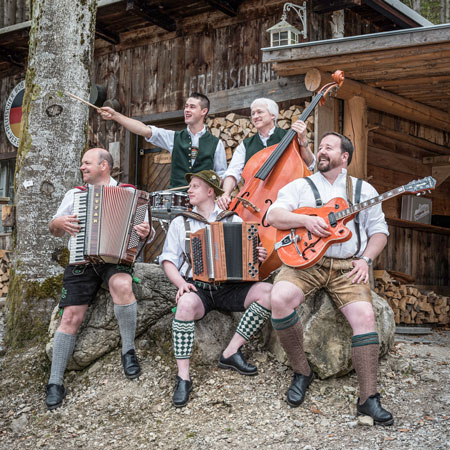 REASONS TO BOOK
A genuine and very popular Bavarian band with multiple line up options
Providing German themed music for any event, any time of the year
Previous clients include Porsche, McDonalds, Holiday Inn and the London Olympic Games
Have performed as far as South Africa and Las Vegas
Based on the Southern tip of Bavaria and available for events all over the world
Live Music and DJ, 1920s and Vintage Music, Cover Bands, Specialist Musicians, Themed Entertainment, Bavarian and Oktoberfest, World and Cultural Acts, Bavarian and German

From the picturesque green hills of Bavaria, you cannot get more authentic than our Genuine Bavarian Band. This Bavarian band is typically available as trio and play brilliant fun-filled German themed music on traditional instruments making them suitable for all types of locations, including ones without means of amplification.

Our Genuine Bavarian Band provide German themed music for any event, any time of the year. From mid-Summer pool parties, anniversary celebrations to festivals and staff Christmas parties. They are obviously one of the very best choices for Oktoberfest entertainment and always put on a magnificent, foot stomping, stein swingin’, lederhosen leaping performance.

With an incredibly flexible service the Bavarian Band offers two to five musicians and can, on request, include dancers too. Their standard line-up is a three piece with accordion, guitar and double bass and additional members can be added for a fuller sound. They perform with traditional, non-electric instruments and require no amplification or PA for intimate performances.

Their live shows a full of humour and they love to engage with their audience. They have a very diverse repertoire full of German themed music, Oktoberfest classics as well as well-known hits, oldies and sing-a-longs in their own Bavarian style.

Contact our team of Entertainment Coordinators to book this German themed band for your event or party.