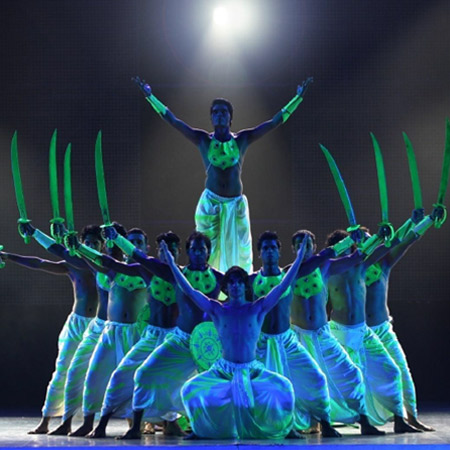 Ticket To Bollywood is a spectacular production from Mumbai, which brings to life the grandeur and extravagance of Bollywood dance and music.  India is a vast country and Bollywood is its most popular export to the world.  Being the largest film industry in the world and the most popular entertainment for the country, Bollywood as a word is symbolic of all that India is – colourful, vibrant, multi dimensional and united in its diversities.

This production will recreate for you the magic of India through Bollywood in its 90 min run.  Presented in three distinctly defined segments, the show encompasses the gamut of Indian cultural variety through innumerable costumes and jewellery, and is a microcosm of 4 decades of Bollywood, compressed in 90 minutes of dizzying colours, high octane energy and fabulous visuals and sounds of Bollywood. The three segments are divided into dances based on classical forms, the traditional Indian folk and festival dances, and finally, the great Indian wedding dances scenario, an essential element of Bollywood films.

The different segments are held together by a melodic medley of popular Bollywood songs. The music of Bollywood films today is a medley of classical Indian music and lots of cross cultural influences such as reggae, hip hop, trance, Arabic music and touches a core in every heart.  Costume, colour, classic songs, a cyclorama of cinematic history – Ticket to Bollywood is Bollywood undiluted.