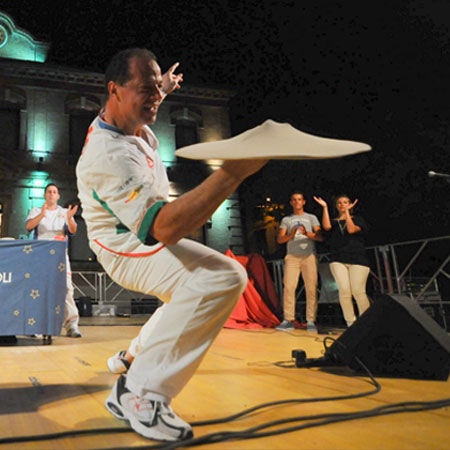 This team of Acrobatic Pizza Makers was born by chance; a group of friends who met in the evening to have fun and share their views and experiences of work at a pizzeria.

Between a chat, a plate of spaghetti and a good pizza, they started throwing the pizzas in the air just for fun and discovered that they were actually really god at it! And so the Acrobatic Pizza Makers were born.

Beginning to meet more frequently, even several times a week and at night when everyone had finished their work, the acrobatic pizza makers perfected their skills before their first official appearance at Anzio, the European championship.

Meanwhile, the various pizza championships arose: regional, national and even worldwide; TV stations were interested in their new discipline and increasingly the group was called as guests on TV, the local radio stations in the country and abroad. They have even appeared on the popular television series, “Italia’s Got Talent.”