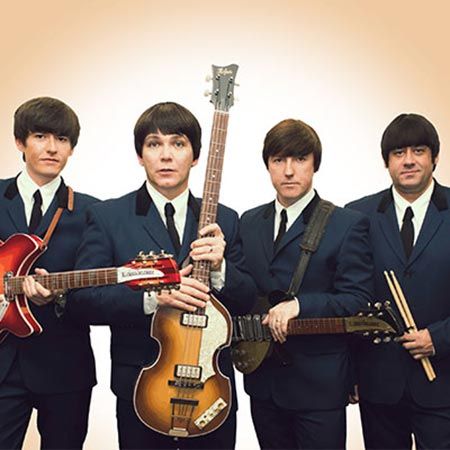 REASONS TO BOOK
Recreate the sights and sound of The Beatles with a stunningly accurate show
Our Beatles tribute band is the headline act at Beatles conventions all over the world
The closest you can get to the excitement of seeing The Beatles in concert!
This live tribute band have spent 10 years as Cavern Club resident band
Our Beatles Tribute Show is based in Liverpool, UK and available to perform at events worldwide
1960s and 1970s, Themed Entertainment, Beatles, Tribute, Lookalikes and Impersonators

Like the original Fab Four, our Beatles tribute band are a group of lads from the great city of Liverpool. Since 1999 they have been recreating the sights and sound of the Beatles with a highly authentic and distinctly Liverpool-flavoured tribute. Natural, vibrant, funny and above all very talented musicians, their love of The Beatles music shines through in their portrayal of their home city's most famous sons.

Beautifully designed costumes and replica guitars, amps and drums help to create the look and sound of the Beatles. There's a refreshing authenticity about the way this Beatles Tribute Show present Beatles music. Being from Liverpool, those famous accents come naturally to our band, whether it is in song or speech.

A genuine Beatles extravaganza, our group deliver four costume changes and a multimedia backdrop to enhance the experience. However, the real showstopper is the way in which this Beatles tribute band perform over 40 of The Beatles' greatest songs so naturally. All eras are covered and all of your favourite Beatles songs are played 100% live and in the recorded key.

Having spent 10 years as a Cavern Club resident band, this live tribute band has now played the venue more times than The Beatles themselves! Highly experienced, our 60s cover band has headlined at shows and festivals around the world in countries including Sweden, Malaysia, Australia, Germany, Indonesia, France, Italy, Belgium, Finland, Denmark, Norway and all over the UK.

The Band make regular appearances around Liverpool, performing their fantastic, “Get Back To Liverpool" show at the Epstein theatre amongst other places. They are still the band of choice at Liverpool attractions such as The Beatles Story Museum as well as The Hard Days Night Hotel and the Penny Lane Development Trust.

To add the WOW factor to your event get in touch with our team of Entertainment Experts to book this exceptional Beatles Tribute Show!