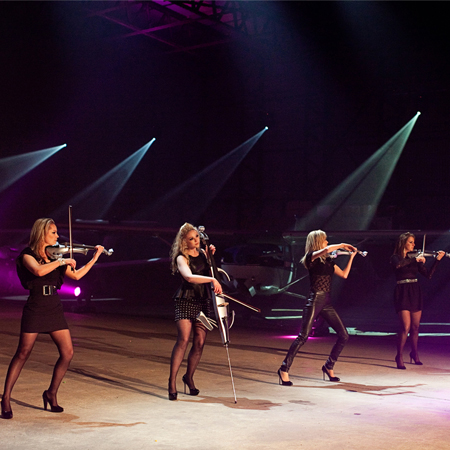 REASONS TO BOOK
Four elegant, glamorous females - musically trained to the highest level
Performed at High Profile events around the world incl Bahrain Formula One
Can perform to backing track or with a Live Band and Dancers
Performed alongside Take That, Simply Red and James Morrison
Based in the UK and available Worldwide
Electric Strings, Live Music and DJ

This act are an electric string quartet comprised of four elegant, glamorous females who are musically trained to the highest level and graduates of London's top musical conversatories.

The girls perform their renowned world class show at concerts, events and private parties all over the world; wowing the crowds and setting the stage alight.

The music world's most exciting electric string group take a glowing pride in the quality of their show, which they have honed into a fast paced impressive spectacle.  When you see the quartet perform you enjoy four professional, dedicated females delivering a high impact show with slick choregraphy and impressive musicianship.

The show is a fusion of musical styles, the essence of the show being filled with classical crossover favourites and instrumental versions of pop songs from past and present.  The middle of the show incoporates world music, as these performers encourage their audience to momentarily escape into a world of cuban jazz bars, enchanted arabic deserts and mediterranean nightclubs.