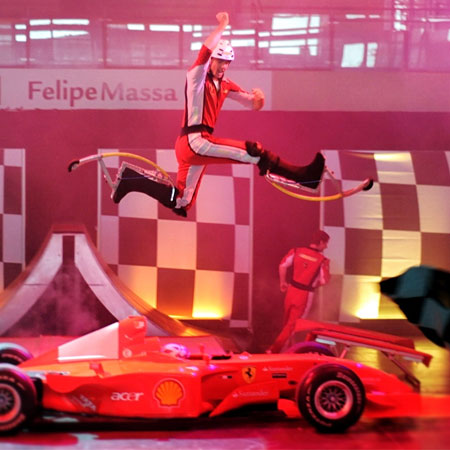 The International Jumping Stilts Acrobat is a truly original, professional performer with over five years of worldwide experience. His artistry involves the use of spring loaded stilts, displaying multiple tricks and somersaults. His breathtaking performances can also include Angle Grinding and Fire skills, breathing fire, using Poi while Spinning and throwing staff tens of feet into the air.

His outstanding credits include numerous television appearances on Top Gear Live Motor Show, performed in London's O2 arena and at theme parks such as Ferrari World in Abu Dhabi and 'Superclubs' all over the world.

Contact a member of our team to find out more.

" He can only be described as exceptional in what he does. He oozes passion and dedication and this shows in the quality of his performance. My clients were amazed, impressed and always re booked him for further events. As well as him being a talented entertainer he is also a genuine, reliable and trustworthy employee. He works well alone as well as part of a team and adapts well to any situation he may be put into. I strongly recommend him for any event that needs that added wow factor "

" Was an awesome performer to work & perform alongside on the Top Gear Live Tour. Very professional and always gave everything 110% I would definitely recommend him to anyone looking for stilts performers, his a very very entertaining and professional individual "

" A consistent performer, who gives his best in each show. He is a talented individual with a positive personality, who works well in a team. "