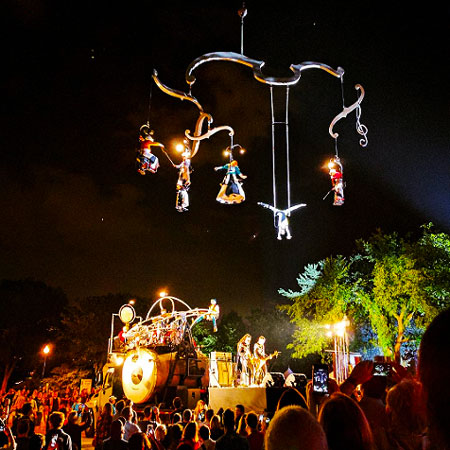 REASONS TO BOOK
Fantastical musical show partially on ground level and in the sky
Includes a music parade in and amongst the audience and an aerial finale performance
Perfect for festivals, city centre celebrations and night time, outdoor entertainment suitable for all ages
Created in 1999 and travelled to UK, Italy, Canada, Germany and other locations around the world
Based near Lyon in France, and available for events internationally
Marching and Walkabout Bands, Specialist Musicians, Live Music and DJ, Musical Shows, Unique Shows, Cabaret and Stage Shows, Roaming Carnival, Street Theatre, Walkabout Characters, Walkabout Musical Acts, Walkabout Entertainment, Unique Acts, Speciality and Novelty Acts

The Music Parade and Aerial Violins spectacle is an all-inclusive performance that will wow audiences on all levels. Fantastic Baroque-style costumes, creative imagery, live music and entertainment on both the ground and up in the sky, lighting and fireworks, this is a thrilling theatrical musical show from start to finish.

A music parade makes its way through the streets with a frenzy of wonderful performers in bizarre costumes. This comes from a troupe of interactive and lively marching drummers followed by a musical float. This float includes a giant drum, see-sawing acrobats and  a live band playing a genre-crossing mic of rock and classical music. Once the music parade finds it’s way to the centre of your performance area the aerial violins take to the sky on a fantastic dangling aerial prop. Your guests will be amazed by the living mobile floating in the sky with aerial violins, costumed opera singer and trapeze acrobats performing stunts up above the ground.

This highly elaborate and large-scale theatrical musical show includes 27 performers of which 9 are the drummers that make up part of the music parade. They offer the spectacle as an immersive experience and it is possible to include volunteers in to the Music Parade and Aerial Violins show, increasing the number of musicians to up to 40.

The Music Parade and Aerial Violins spectacle was created back in 1999 near Lyon, in France, and has travelled all over the world stunning audiences with it’s grandeur, majesty, unusual music and visual appeal. It is perfect for festivals, city centre celebrations and night time, outdoor entertainment suitable for all ages.

To book this one of a kind music spectacle, contact our team of Entertainment Coordinators.