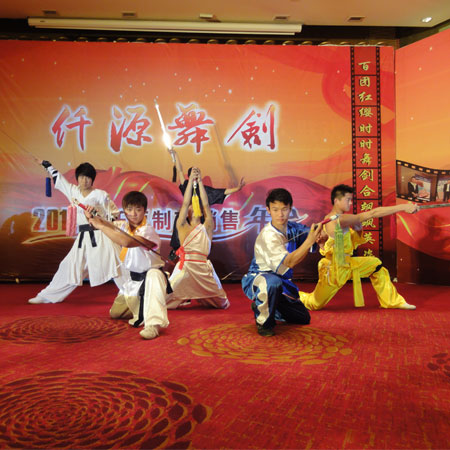 Formed in 2006 from existing members of the Singshan Shaolin temple performance team and the Tagou Wushu School, this incredible Kung Fu performance group has over 10 years of acting and performance experience.

All highly trained elite Kung Fu performers their group is highly sought after for events around the world. They perform at national spring and lantern festivals, the Wushu performance at des Champs Avenue France, as well as numerous private events. They also performed at the opening and closing ceremony of the 2008 Beijing Olympics.

Their authentic performances include traditional costumes and choreographies from the Kung Fu and Wushu tradition and can incorporate a range of traditional instruments such as knives, sticks, poles and flags.

Their high-energy performances will be sure to create an eye-catching spectacle that will leave a lasting impression in the minds of spectators. Whether you are organising an after dinner show, festival or private party, this world-class Kung Fu team will be the highlight of your event.