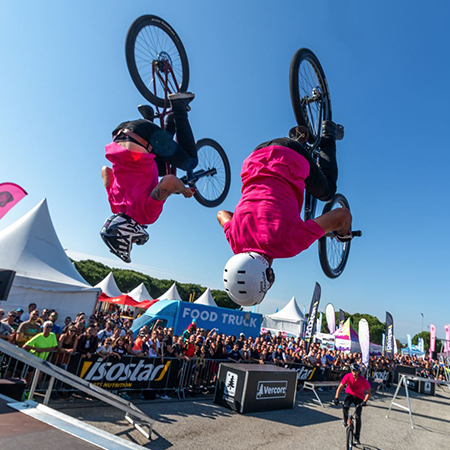 REASONS TO BOOK
Among the best Mountain Bike Freestyle shows in Europe
The team have performed over 1000 shows worldwide
An amazing display of tricks leaves the audience always wanting more
A Finalist on TV show France's Got Talent 2011
Based in the South of France & available to perform worldwide
Sporting Theme, Themed Entertainment, Sporting, Cabaret and Stage Shows, BMX Rider, Speciality and Novelty Acts

This high quality Mountain Bike Freestyle team are among the best in Europe and have performed over 1000 shows worldwide.  The team makes every effort to continuously improve, certainly in riding, but also in attention to detail that make the difference: they are true professionals. Their passion is the atmosphere, the boosted show, turning the spot into a fiery arena for a dozen or so minutes.

Rhythm, explosiveness, an amazing display of tricks... The audience holding their breath, then a second later, the tension is released with an explosion of applause when the rider lands his trick, triumphing. They do their job with a real sense of sharing, making people dream and bringing true emotions to the public. The audience always wants more.