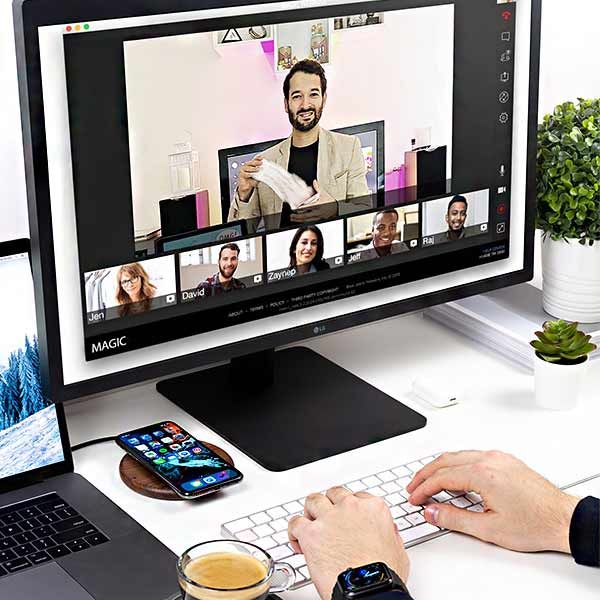 REASONS TO BOOK
An interactive virtual team-building workshop where your audience will take part in a highly visual and magical experience
The online workshops include visual magic and interactive elements perfect for your virtual corporate team building day or online private party
Our online magician is highly experienced at delivering magic on stage and online with over 50 live-streamed shows under his belt
Previous virtual clients include Microsoft, Biscuit International, IBM and MMA
Our live-streamed magician is able to incorporate a range of corporate messaging, logos, branding, and products to suit client specifics
Virtual Entertainment and Performance, Virtual Magicians, Virtual Entertainment

1. What will the magic show involve and will there be interactive elements?

Our magician will introduce the online show with an interactive body trick including the spectator's arms. He can then incorporate some of the following:

- An interactive questions and answer game

- An interactive, prediction and  mentalism piece with envelopes

- A visual street magic trick including cups and a ball

- A visual Magic trick including a ball and the iPad

- A visual trick including a Kiwi and a cup

- A visual trick including cards and an iPad

- He can also include mind-reading of any book, make a glass go through a table and make your business card float in the air!

The digital magic show can be from 30 minutes up to 1 hour in length depending on your requirements.

3. Can the show be live-streamed or pre-recorded?

Yes, your show can be live streamed with one camera or our magician can create your pre-recorded show with 2 cameras in approximately 2 weeks.

4. Where will the show be filmed?

The live-streamed or pre-recorded show will be filmed in our magician's professional studio with 1 x camera and professional lighting.

5. What platform can the show be hosted on?

The live-stream magic show can be on Zoom, Teams and Webex.

6. Are there any platforms the show can't be hosted on?

Our magician prefers to not use skype.

7. Is there a minimum or maximum number of participants required for the live virtual show?

A minimum of 6 participants is required but no maximum - this may be limited to the platform you choose.

8. Will our guests need anything to participate?

Your guests will require a couple of everyday objects such as a glass, a book, a pen, a coin and a card. A kit list will be sent out to you prior to the event.

9. Can the show be customised to my company?

Yes, our magician can include logos on his iPad, keywords and your products can even appear out of the iPad.