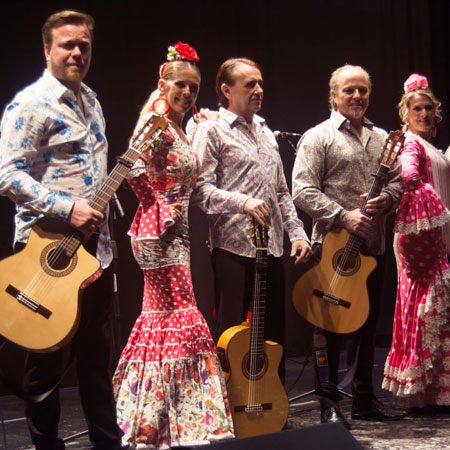 REASONS TO BOOK
Get involved with a Spanish Flamenco act featuring the distinctive music made famous by the legendary Gipsy Kings
This energetic show merges flamenco rhythms & Gypsy music with the spirit of Andalusian folk
Our Spanish guitarists bring the soul of Andalusia to their performances with their stunning musical tribute
This tribute show is available with Flamenco dancers to add a splash of colour to your event
Book Gipsy Kings Tribute for events in Seville and worldwide
Guitarists (Classical and Spanish), Live Music and DJ, Spanish And Flamenco, World and Cultural Acts, Gipsy Kings Tribute, Tribute, Lookalikes and Impersonators

A diverse rumba-flamenco pop group, The Gipsy Kings are a band that have had significant impact on the world’s musical landscape. Bringing Spanish gypsy music to the consumer market, the Kings helped to popularise Spanish Flamenco acts throughout Europe and globally. For this reason, it comes as no surprise that our Gipsy Kings Tribute decided to form. Performing a vibrant tribute to the legendary French-Andalusian band, this tribute show features a quartet of talented Spanish guitarists, not to mention vibrant Flamenco dancers and additional instrumentalists. The ultimate tribute to the Gypsy Kings, these seasoned performers are no strangers to the stage, and use their many years of experience to make their tribute shows truly memorable.

Formed in Seville, the Spanish guitarists in this tribute show are four friends with a passion for rumba and flamenco music. Aiming to bring the soul of Andalusia (Southern Spain) to the whole world through the sound of their guitars and voices, this band merges flamenco rhythms and sounds with the spirit of Andalusian folk creating a festive, relaxed and joyous atmosphere.

Led by an award winning Flamenco guitarist, all four of the exceptional musicians and singers in this tribute are dedicated to recreating the feeling of a genuine Gipsy Kings concert. Performing a divers repertoire of the band’s most iconic hits, as well as other stunning Spanish and gypsy music covers, our group’s repertoire features everything from ‘Volare’ and ‘Bomboleo’ to traditional Flamenco tunes like ’Alegrías De Cádiz’ and ‘Tangos Flamencos’. Able to adapt their extensive repertoire to suit your event, our musicians provide fun, energetic live shows.

Accompanying this Gipsy Kings Tribute are a group of great musicians from the Sevillian musical area, playing instruments like double bass, conga and chimes. If you want to add an extra splash of colour to your event, you can also book professional "bailaoras" (Flamenco dancers) to accompany the  musicians. Providing a dynamic Spanish Flamenco act, audiences love the visual element supplied by these fantastic dancers. Having performed at many prestigious venues including Beirut International Exhibition & Leisure Center and Don Carlos Hotel, our Gipsy Kings Tribute bring an authentic taste of Spanish culture to all occasions. To learn more about booking this act for your event, get in touch with our team at Scarlett Entertainment today.