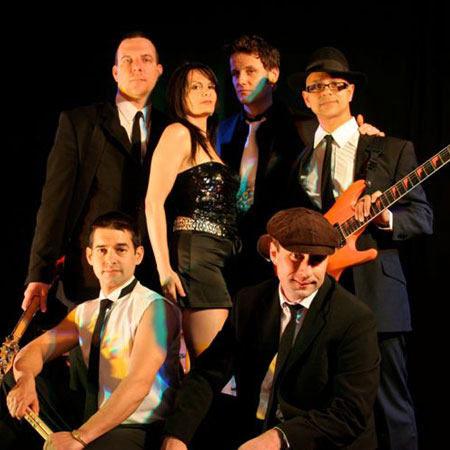 REASONS TO BOOK
Highly recommended Party Covers Band available as a 6-11 pc will get guests up and dancing at your next event!
Also offer a during drinks/ dinner background set and a DJ option
Sought after party band offer sets themed to different eras such as the 1970s, 1980s, 1950s & School Disco
Performed internationally for high profile clients and global brands such as John Lewis plc, Jamie Oliver, Lancôme and Richard Branson
Based in the UK our party cover band are available to perform over the UK, across Europe and Worldwide
Cover Bands, Live Music and DJ, 1960s and 1970s, 1980s and 1990s, Themed Entertainment

Bring your party to life in incomparable style with our top class party covers band. This fantastic function band are one of the leading party starting institutions in the UK with over fifteen year’s performing experience and hundreds of sensational shows to their name. Our covers band is the ultimate choice of musical entertainment and their dazzling performances and fantastic range of songs and styles will have the dance floor packed at any kind of event or party.

This themed party band offer a range of tailor made shows in themes and styles of your choice and know how to create the perfect night of music to suit any event. Book this stellar party band for a show stopping performance that will turn your event into an unforgettable party extravaganza. With a staggering set-list of over 500 songs to choose from this incredible party covers band offer a premier service and stunning performance that puts them leagues above typical function bands.

With a list of previous gigs including private events for Richard Branson, Jamie Oliver, James Caan and Gaby Roslin and corporate events for John Lewis, Orange, New Look and Hewlett Packard you can bet that this covers band know how to put on a professional and thrilling performance. Our party band are available in a range of sizes from an intimate duo or trio to rocking twelve piece with multiple singers and swinging horn section for a dazzling and dynamic show.

Offering a range of themes and styles to suit any occasion, this themed party band can deliver everything from modern pop and school disco themes to 007 Bond nights, 80s parties and sing-along ABBA tribute shows.

Our versatile and flexible party band is dedicated to putting on a crowd-pleasing show and can produce a top quality show based on any theme or style you give them.

Scarlett Entertainment brings you the best party bands and cover bands for events and parties around the world.

To book one of our fantastic cover bands, contact our helpful team.

" BT say it's the best one yet. Anyone who can keep two thirds male audience to one third female dancing until the bitter end must be good. They thought you were great and in the words of my client, "The best choice of band we could have made "

" Just a quick line to say a very big thank you for playing at our wedding reception on Saturday 23rd June . We thought you were brilliant and everyone there has commented on how good you were - they couldn't believe it. We particularly enjoyed the seventies tribute set, especially as we'd 'had a few' by that time! Hope you don't mind us borrowing your wigs for the last few songs! We've got some great photos. We thought you were very professional and great fun too. We can't thank you enough for making it such a memorable evening, that we didn't want to end. "

" We had a fantastic day, couldn't have asked for better. The band were fantastic, definitely a good investment. Since the wedding no end of people have commented on how great they were. I saw people dancing that night that I've never seen dance before! Thank you so much to everyone. "