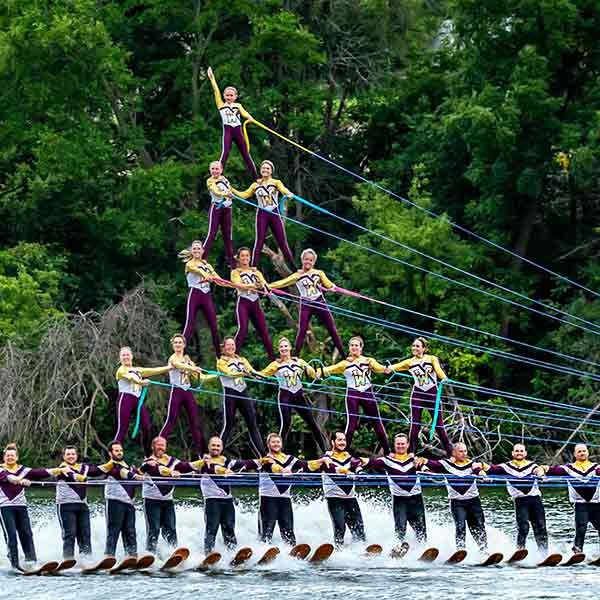 REASONS TO BOOK
The best water ski stunt performance team in the world who attract around 100,000 viewers each year!
Expect to see swivel skiing, jaw-dropping jumps, turns, colourful costumes and magnificent pyramids big and small
Established in 1960 they have a wealth of experience with 63 tournament victories and 20 U.S. National Championships under their belts
Achieved a Guinness World Record in 2018 with their 80 person pyramid and have performed stunt shows all over the world including China and the UAE
The ideal entertainment option for sport themed events, water-themed events and high-end water performances
Stunt Shows, Water Shows, Cabaret and Stage Shows, Stunt Act, Speciality and Novelty Acts, Water Shows and Displays, Outdoor Entertainment

Introducing the best water ski stunt team in the world with 63 victories and numerous awards. Established in 1960 they now have over 100 members who have performed all over the globe including the USA, the UAE and in China.

This leading team are based in Wisconsin, USA and perform weekly, wowing audiences and educating the public about water-skiing along with safe boating.

- 2012:  Hold the world-record of a 55 person quadruple 4 tier pyramid outside of the United States - this was achieved in China and co-hold the title with the Chinese Water Ski Team)

- 2013: The first amateur 5 tier team pyramid to be created outside the United States

- 2013: Hold the world-record for the largest pyramid created in one single team - this included a quadruple 4 tier pyramid with 47 people

- 2019: The team hold the national Record of 8 barefoot pyramids

- The first amateur team to perform in the UAE

- The first amateur team to perform in Lebanon