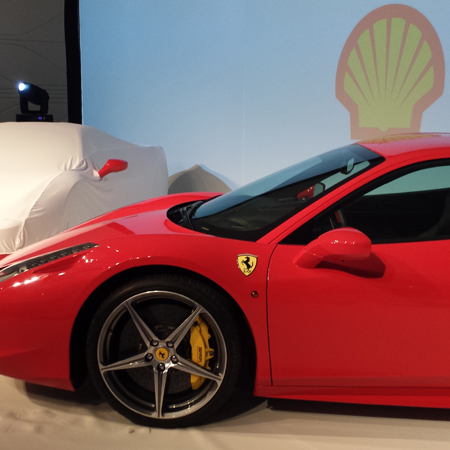 3D Video Car Mapping is the latest form of projection advertising that is accomplished by using image mapping and projection on a car to create an amazing display!  This group are considered an industry leader in 3d Projection Mapping and have won numerous awards, including the Mercedes-Benz special award at the Septembeam Video Mapping Competition and 1st place at the Genius Loci Weimar International Videomapping Competition.  Based in Europe, they have worked with top global brands including Range Rover, Audi, Volkswagen and KLM.

This year the video mapping group were booked to perform at a special event to celebrate Shell's partnership with Ferrari ahead of the Abu Dhabi Formula 1 race.  Their amazing video mapping show was projected on to two Ferraris on stage, temporarily bringing them to life and wowing the audience.

Guests at the special event included delegates from the Ministry of Energy and Abu Dhabi National Oil Company and there was a special appearance from the Ferrari drivers Fernando Alonso and Felipe Massa.