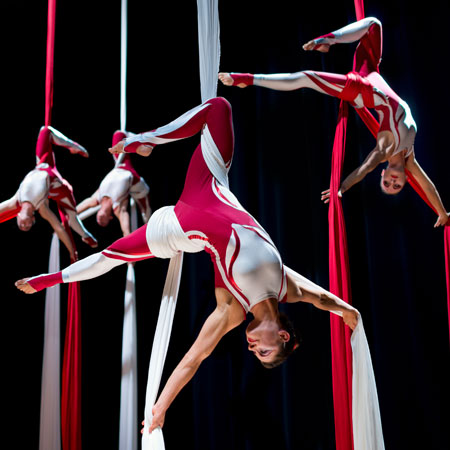 Book this incredible aerial silk act for a one of a kind aerial performance at your event. This aerial act is renowned for thrilling audiences with high-energy and tightly choreographed aerial silks displays. The aerial acrobats have performed these amazing acts across the globe and have learnt the art of how to truly excite and entertain the spectator.

The incredible aerial performance is a display of skill and elegance from the highly trained aerial acrobats. They will effortlessly dazzle the audience with a jaw-dropping aerial silks act. Our aerial silks act will stun audiences as the talented gymnasts display their incredible flexibility and balance right before their eyes. The aerial silks can become part of your event decor and the aerial acrobats will be completely mesmerising to watch.

Customisable options are available to suit your event from a solo aerial act, duets and even group aerial performances. Silks come in red, white, black and blue and have other options available upon request. The Aerial acrobats can also come with a variety of different costume colours such as, but not limited to, gold catsuits, silver and white and red or white corsets.

To book the awe inspiring aerial silks show for your event, party or special occasion, contact our team of Entertainment Specialists who will be more than happy to help you through the booking process.

" The event was fantastic and Rachel was amazing! Her performance was great and both her and her boyfriend are very nice people, we had a great time with them and even the kids liked her a lot. "

" They were the talk of the evening! We had amazing comments about them… They made our event. "

" ...Our event was a marvelous success, breathtaking. The girls were amazing, perfect, highly recommend them. Punctual, very professional & passionate. A real pleasure working with them "

" ...The audience certainly did enjoy it. The girls were great & a pleasure to work with. It all went well. Until the next time "

" ...Thank you for making the Abu Dhabi corporate event such a pleasure! I hope we'll have the opportunity to work together again in the future "

" Rachel and the team did a fantastic job and their professionalism with working with all the different aspects of the show was exceptional, please pass on my thanks. "

" I had the great honor to collaborate twice with them on two prestigious events: one in Brussels and one in Marrakech. A very professional team who made it possible whatever the circumstances were. Thanks again and I look forward to work with you in the future. "