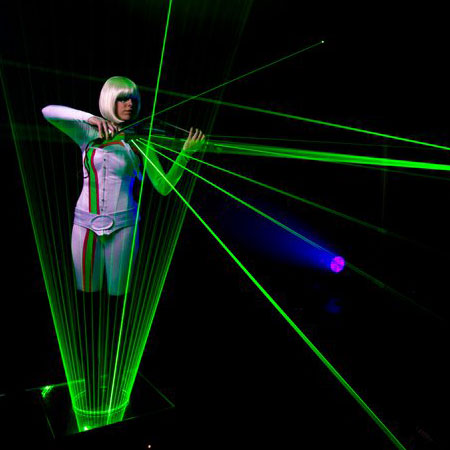 REASONS TO BOOK
This high-end show uses state of the art laser technology
Spectacular and innovative corporate entertainment that can include up to 3 performers
Violin has a laser beam and manipulates lasers during the show
Incorporate your company logo in the laser violin show
Available for worldwide performances
Live Music and DJ, Electric Strings, Latest Technology Acts, Laser Performers, Cabaret and Stage Shows, UV Glow,LED and Laser Show, Brand Reveal Entertainment, Laser and LED Poi

A stunning virtuoso performing the electric violin, who transports the audience on a musical journey from the classics to iconic movie scores.  This act is much more than an instrumentalist. She is a unique act featuring state of the art laser technology. She literally plays her violin with a laser beam and manipulates lasers during the performance. This show is a fusion of music and light.

All of the laser violinists are highly skilled performers having graduated from the world’s leading conservatoires.  They have worked with top London Orchestras, on West End shows and have performed with artists including Beyonce, Cee-Lo Green, Cheryl, Gnarls Barkley, Gorillaz, Jay-Z, Kanye West, Mark Ronson, Noel Gallagher, Rod Stewart, Dame Shirley Bassey, Simply Red, Take That and The Killers.

More recently she supported Leona Lewis at the opening of the Landmark in Hong Kong and played at the Henley Festival where the Duel show performed alongside Sting, Katherine Jenkins, Alfie Boe, Blue, LuLu and Olly Murs as part of a huge laser and firework spectacular.

Their strong classical foundations combined with the vast experience of live performance create a compelling, visionary performance like no other!  This really is the greatest musical laser act in the world!

" The performance was outstanding and very well received by our audience of 1,700. "

" The most wonderful act I have ever seen. "

" Was great to work with - we appreciated her flexibility in the set-up time and her performance was absolutely wonderful. Please pass on our thanks. "

" Thank you so much for creating an electric atmosphere that stayed throughout the whole night. Our eyes were transfixed! "

" The evening began in dynamic and mesmerising fashion with an eye-catching opening. Quite unannounced, an electric violin player, dressed in a glamorous Doctor Who villain costume, played along with a stirring soundtrack. During a stunning laser light show, a hand-held laser appeared to be shining from the bow of her instrument and the effect was extraordinary, even in front of a hardened trade audience. "