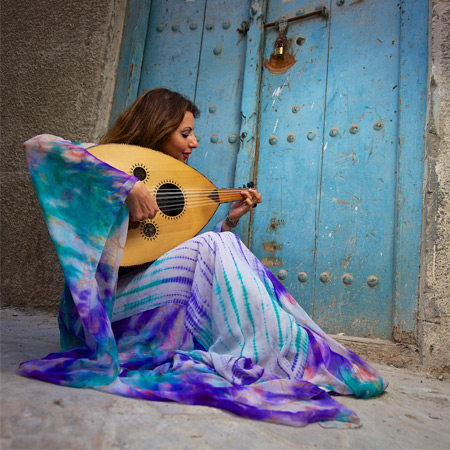 REASONS TO BOOK
Passionate about performing on both an acoustic and electric Oud
Her soothing voice greatly compliments her out-of-the-box style
Brings a funky edge to popular Arabic music with her electric Oud
Her unique combination has an uncanny ability to mesmerise audiences
Based in Dubai and available to perform at events worldwide
Arabic Bands, Live Music and DJ, Arabic, World and Cultural Acts

Oud Player and Singer Nina is passionate about performing on both an acoustic and electric Oud.

She performs traditional Arabic music with her acoustic Oud and brings a funky edge to popular Arabic music with her electric Oud. Nina’s gentle, soothing voice greatly compliments her out-of-the-box style and it is this unique combination of classic and eclectic that has an uncanny ability to mesmerise audiences.

Oud Player Nina came to music relatively late in life, only to discover that the music had always been there somewhere hidden, waiting to be heard. It was at the age of 24, Nina visited Egypt to see the Pyramids and saw the Arabic Music Institute in Cairo, which is housed in the most beautiful building.

Inspired by the architecture and feeling of the place, she enquired as to the possibility of studying there. She ended up enrolling almost immediately and did not go back to Sweden for 3 years, returning with an Oud on her back and a diploma in her hand!

From this moment on, music has been her life and has led her from Egypt, to Spain, Greece and eventually Dubai. Music has never been a major decision in her life, but something that has always just 'happened'.

While she loves listening to jazz and Fairouz, Nina's favourite style of playing are the simple, traditional songs, like Sayed Darwish, beautiful music and meaningful words.