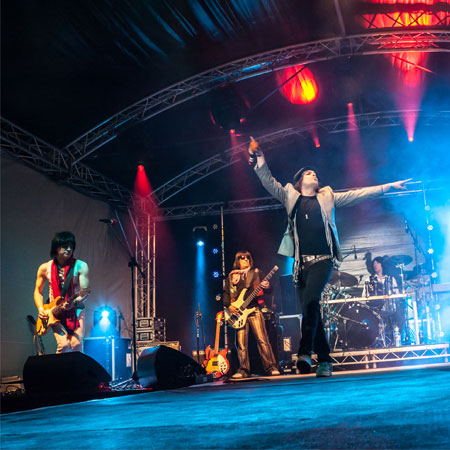 REASONS TO BOOK
Popular Rolling Stones Tribute - Perfect for theme nights and tribute events
Recreate the songs with "frightening accuracy" - Empire Magazine
Formed in 1997 and played sell-out concerts at home and abroad
Performed a 10 date tour of the prestigious O2 Academies
Based in the UK and available to perform at events worldwide
1960s and 1970s, Themed Entertainment, Rolling Stones, Tribute, Lookalikes and Impersonators

This Rolling Stones Tribute Band were formed in 1997 to celebrate the music and career of the greatest rock n' roll band of all time. Since then they have gone from strength to strength, playing sell-out concerts at home and abroad.

They take all the cheese out of the tribute genre and replace it with beauty and beef. Their shows place great emphasis on the Rolling Stones’ actual live performances thus creating a dynamic state show packed full of brilliantly played classics from the early 60s, 70s and 80s, through to the new releases of today.

The band delivers a rich feast of towering musical talent and electric stage presence with a generous side of humour and real affection for their renowned idols. Complete with glitter, colour and thrills they offer the epitome of musical passion where the band loves the crowd and the crowd loves the band right back - with rainbow-coloured sequins on!

The band members are all outstanding musicians with numerous professional credits to their name and recreate the songs of the mighty Stones with “frightening accuracy”. They have performed at events all over the world and a 10 date tour of the prestigious 02 Academies counts as a testament of their incredible talent and world-class tribute performances.

The front man is avaialble to book on his own as a very conivicing Mick Jagger Tribute Show.

" This tribute band manage to re-create the Stones at their most prolific and do it with all the passion and raw energy of the real thing. Great fun, fine musicians and an excellent choice of songs...not to be missed! "

" Hit after hit were walloped out with a passion, a smirk, and a wink that kept the dance floor moving all night... "

" A storming set at Ashton Court "

" Without a doubt the most exciting tribute to the Rolling Stones...Outstanding "