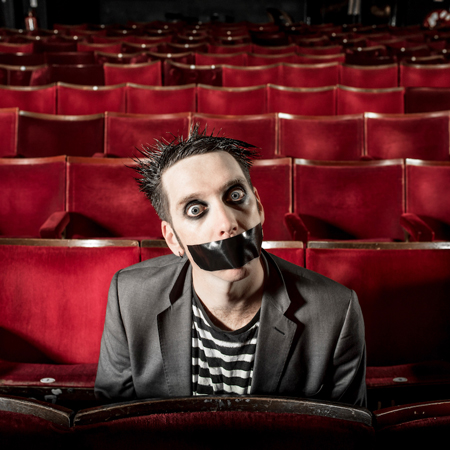 Sometimes actions speak louder than words. Tape Face is a totally unique London-based silent comedian who has been on the comedy circuit for years and become a viral sensation thanks to his appearance on America’s Got Talent. His audition video and show performances now have over 47 million views making it one of the most viewed America’s Got Talent videos ever.

The silent stand up comedian has universal appeal and a stage show customisable for any audience type. The subtle yet hilarious comedian speaks no words making his comedy accessible to audiences worldwide. The ideas behind this silent comedian’s routines are so simplistic but it’s the way he delivers his acts that makes this comedian one-of-a-kind. His stage antics, are wry incredibly delightful and guaranteed to bring out the inner child in everyone. He loves to include invite members of the crowd to the stage to be part of his acts, but is humour is very gentle and he ends up making heroes of the people he brings to the stage.

Tape Face is a silent stand up comedian who crafted his skills as a circus and street performer back in New Zealand, and therefor perfectly apt at captivating an audience. He then began this unique comedian act and has provided laughter all over the world event since and picked up multiple awards along the way. His use of simple everday household props leads the audience into surreal and hysterical situations that they won't forget.

He gained attention for reaching the finals of America’s Got Talent and his audition has become one of AGT’s most viewed videos ever. He sells out shows all over the UK, performed his act at The Royal Variety Performance and been on several TV shows including The John Bishop Show. He brings an edgy yet accessible form of humour that young and old a like will find side-splittingly funny.

Contact our team at Scarlett Entertainment to book this exceptionally and one of a kind silent comedian to bring joy and laughter to your guests at your event.

" Classic silent comedy with a twist, imagine Marcel Marceau teaching you the moves to Blame it on the Boogie and you’re halfway to understanding the appeal of this compelling act "