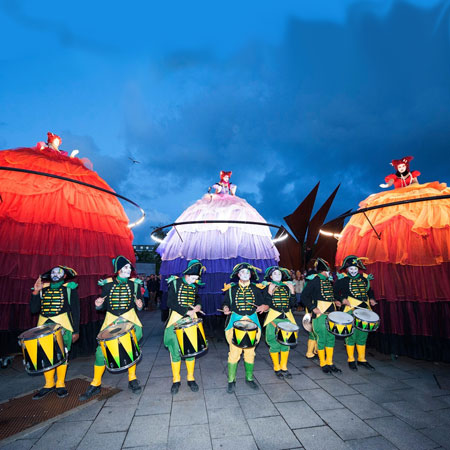 Book the fantastic Giant Dolls and Drumming Parade to capture the attention of your guests and offer a visually captivating walkabout act. The sounds of the drumming parade piques interest whilst the giant dolls have spectators in complete awe of their grandeur.

This musical parade features the infectious rhythms and humorous antics of our France-based Comedy Roaming Drummers. These brightly coloured percussionists have costumes based on tin soldiers and they deliver a very interactive drumming parade. As they perform, they like to engage with members of the audience, joke around and get up to all sorts of mischief.

The walkabout act also features three unmistakable giant dolls. The magnificent divas break out into operatic song with sound being projected from within their costumes. The giant dolls have different choices of stunning colourful Victorian style dresses. These dresses are perched on multiple wheels giving the impression that the Opera divas are floating along.  For night time performances, the giant dolls’ dresses are equipped with lighting to fully illuminate them as they wander around.

The Giant Dolls and Drumming Parade is a thrilling walkabout act that is highly suited to outdoor festivities, roaming the streets and an event large enough to accommodate the giant dolls. As a musical parade is is perfect for offering a but of light-hearted entertainment that can roam from one area to another.

To find out more or to book the Giant Dolls and Drumming Parade to wow your guests, contact our team at Scarlett Entertainment who will be more than happy to help.