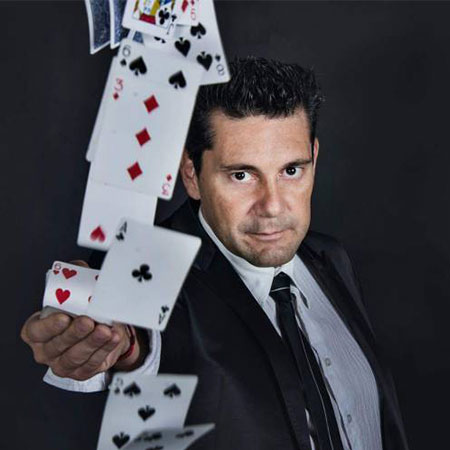 REASONS TO BOOK
Spanish roaming magician amaze both children and adults with logic-defying tricks
Quick-witted and charming entertainer wins the public over with his friendly personality and incredible illusions
Stage and close up magic act is the perfect combination of mind-blowing magic and humour
Ideal entertainment option for galas, weddings, children’s parties, resorts, corporate events, etc.
This Close Up Magician is based in Tenerife and available for bookings across Spain
Magic and Illusion, Close up Magician, Comedy Magician, Walkabout Entertainment, Magicians and Mind Readers

Amaze both children and adults alike at your upcoming event or special occasion by booking this Close Up Magician from Tenerife, a talented illusionist who will make guests at your party rub their eyes in disbelief.  This Spanish roaming magician will perform mind-blowing tricks on people and leave them wondering if magic is real.

This entertainer is a specialist in leaving audiences speechless and making them laugh. His magic comedy shows are one of his most in-demand performances, especially among younger audiences. Both his stage shows and his close up magic acts involve lots of audience interaction. He enjoys interacting with viewers and making them part of his performances.

An illusionist that perfectly combines magic with humour, his comedy magic shows is ideal for any occasion. He roams around your venue inviting people to witness incredible tricks with cards, coins, ropes and other elements and also unexpected illusions that cause jaws to drop. Quick-witted and charming, this roaming magician is guaranteed to win the public over with his friendly personality and engage them with his logic-defying illusions. Fun and laughs are guaranteed for the whole family!

Our Spanish roaming magician regularly performs at private events, birthday parties, weddings, resorts, galas, and many more. A popular entertainer among little ones, he’s also a regular at children’s parties in Tenerife and around the Canary Islands.

Scarlett Entertainment offers a variety of close up magicians and magic comedy shows for occasions in Tenerife, Spain and all over the world.

If you would like to book this Close Up Magician for events in Tenerife, the Canary Islands or Spain, then contact us right away and ask to speak to one of our Entertainment Coordinators. They will be delighted to provide further details on his walkabout magic act and guide you through the booking process.