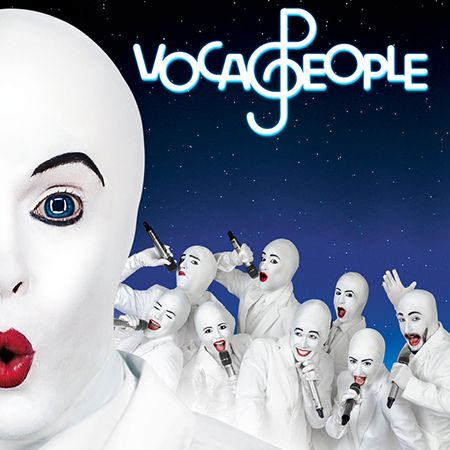 Book the Voca People and give your audience an a capella music experience that’s totally out of this world. Our incredible a capella stage show is sure to thrill and dazzle audiences and has earned rave reviews from around the world. Your audience will be amazed and entertained by the sensational voices of our vocal group as they recreate some of the biggest hits in music in their stunning a capella style.

This hilarious and original stage show features an incredible range of songs in breathtaking new vocal arrangements, fabulous costumes and plenty of audience participation to have your guests singing and laughing along. This magical and totally unique musical show has wowed millions worldwide and performed on TV stations in dozens of countries around the globe.

Our incredible a capella stage show tells the story of the Voca People- friendly aliens from planet Voca who communicate only through music and vocal sounds. These strange musical people have crash landed on earth and found that their spaceship is out of power, and the only thing that can restore it is the energy of music. Join the Voca People in this extraordinary musical show as they discover the sounds and songs of Earth in a hilarious and electrifying stage show.

Guests will love the hilarious antics of our performers and will be blown away by the range of sounds and expressions they can make with their voices. This vocal group takes a capella music to the next level with their exciting and energetic performances which cover a huge range of musical styles from Madonna to Mozart.

Scarlett Entertainment offers you a spectacular range of live music and theatre to suit any occasion. Contact our team today to arrange booking one of our fabulous acts for a performance at your event.

" A BLAST! THe highly charismatics group of comedian singers SIZZLE! "

" The coolest show ever "

" SIMPLY GREAT! A KNOCKOUT! You leave the theatre feeling entertained. "

" IMPRESSIVE! Filled with famous melodies by everyone from Mozart to Michael Jackson. The harmonies are OTHERWORLDLY! "

" YOU CAN’T HELP BUT MARVEL AT THEIR SHEER TALENT! It’s like watching the acrobats of Cirque du Soleil. An entertainment that caters to every musical taste. "

" Fantastically fun - Truly out of this world! Unique, awe-inspiring, hysterical! "