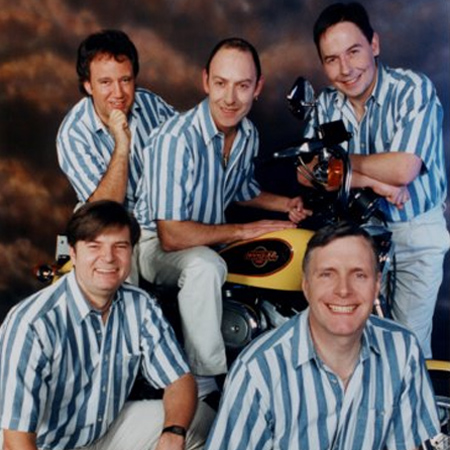 REASONS TO BOOK
The group magically capture the original sixties surfing sound
A television appearance catapulted the act into success
Paint a dazzling picture of beaches, parties and endless summers
Create nostalgic and neatly trimmed harmonies with a tight musical mix
Based in Essex and available to perform at events worldwide
Other Tributes, Tribute, Lookalikes and Impersonators

In the sixties, at the height of their original popularity, The Beach Boys propagated their own variant on The American Dream, painting a dazzling picture of beaches, parties and endless summers; today this Beach Boys Tribute act recreate that dream.

The band were founded in 1999 from the remnants of a Beach Boys inspired group they were earlier members of. The idea to form a new band originated from a request from a television company for them to appear in a programme hosted by Ann Robinson based on American themes.

Following their appearance, the success led them to rehearse a set of songs to take on the road and this Beach Boys Tribute act was born. Their accurate harmonies and tight mix of two guitars, bass, drums and keyboard create the nostalgic feel of those fun days from the 60's, 70's and 80's.

Listen in amazement as Dave, Paul, Kevin, George and John recreate the super summer sounds of Brian, Mike, Carl, Al and Dennis, who made up the inspirational and very different California group The Beach Boys.

Covering hits such as 'Little Deuce Coup', 'I get Around', 'Surfin Safari' and 'Help Me Rhonda' will get any audience yearning for the sun and surf.

" Was at your gig in Maidstone on Friday night (23/7/10) and really had a great time. Your music is very authentic and you certainly got us all up dancing. Well done! "

" Went along with friends to see you last night at the Boom Boom Club on recommendation - you were all brilliant, great harmonies, great musicians, you can all sing and even swapped instruments for one song ! . As well as being a fantastic tribute band to the Beach Boys, you involved the audience, great amosphere - you got a great reception from your audience. Will definitely see you again when you are on at this venue. "

" Went to see you at the Millfield in Edmonton last night (13/5/2010). I think that, vocally, you are the best Beach Boys tribute band I have ever heard or seen. My friend, who came with my wife and myself to see you, is a bit of a Beach Boys expert. He says he would queue to see you again. Thanks for an excellent evening. "

" Just to say thank you for the amazing gigs over the weekend. Felixstowe was fantastic; it was a great party atmosphere. The Bedford River Festival was mind blowing. 1000's of people crowded around, young and old alike. They were singing, dancing, jiving and really having a ball. The sound and atmosphere you all created was amazing, my favourite gig so far. "

" Guys, thanks for making my birthday celebrations on 10th May such a memorable event. Everybody thought you were fantastic and special thanks for your rendition of "Help me Brenda". "

" Thank you for a brilliant performance at Mathew Street festival. First time we have seen you and we were amazed by your fantastic harmonies. Hoping you will be doing some gigs near us very soon!! "