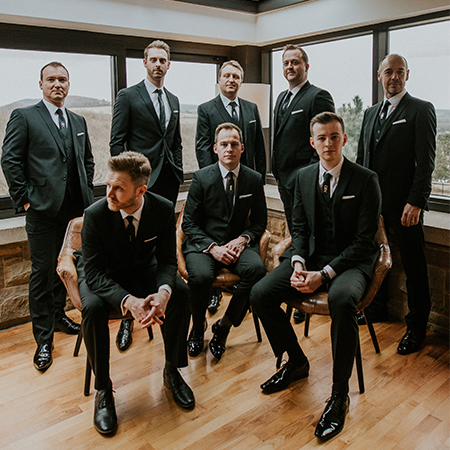 REASONS TO BOOK
Welsh male voice choir gained international fame when they won the Last Choir Standing competition run by the BBC
Well known for their strong vocals, sophisticated style and their varied and eclectic repertoire
Specialising in different styles of music including Welsh hymns and folksongs, opera and music theatre, swing and Pop music, etc.
Only Men Aloud performed at the London 2012 Opening Ceremony at the very moment the Olympic Flame was lit
Now available for corporate events, they continue their busy touring and concert schedule across the UK, Europe and beyond
Choirs - Gospel and Barbershop Quartets, Harmony and Acapella Groups, Live Music and DJ, Famous Musicians,Bands and DJs, Talent and TV Show Personalities

Only Men Aloud have been delighting audiences around the world for over eighteen years. They were formed in the year 2000, with the hope they could inject some new life and blood into the Welsh Male Choir tradition.

The men have become well known for their strong vocals and their varied and eclectic repertoire. A typical OMA concert will feature many different styles of music: Welsh hymns and folksongs, Opera and Music Theatre all the way to Swing and Pop music.

Eleven years ago, they were named BBC One’s Last Choir Standing and this led to an album deal with Universal Records. In 2010, they won a Classical Brit Award for Best Album of the Year. They have toured every year since winning the show, all around the world and have worldwide record sales of over 300,000.

2012 London Olympics and Other Memorable Performances

Over the years, the hugely popular group has built up a strong fan base across the country and were honoured to be asked to sing at the London 2012 Opening Ceremony at the very moment the Olympic Flame was lit. This performance was broadcast to an estimated global TV audience of 900 million people.

OMA have given many memorable performances, with numerous appearances at outdoor festivals and proms. They have performed twice at The Royal Variety Performance, been seen on numerous television programmes and are familiar faces at sporting events; they sang at the opening ceremony of the Ryder Cup in 2010 and the Ashes in 2015.

In 2014, they undertook a highly successful tour of the USA including performances at the famous Ravinia Festival in Chicago and the North American Festival of Wales in Minneapolis. OMA have now recorded six studio albums and are making plans for a seventh.

Only Men Aloud Favourites was released at the end of last year. They continue their busy touring and concert schedule, right across the UK, Europe and beyond. Recent notable engagements have included performing at The UEFA Champions League Final Celebrations in Cardiff, and a trip to Mumbai in India for the group’s first appearance in Asia.

The end of last saw them heading out on the road once again for their Decade Tour, culminating in an incredible Gala Concert in Cardiff to celebrate the ten years since winning Last Choir Standing. This year they have performed in Disneyland Paris, and have toured with the World’s best brass band, The Cory Band, in a series of concerts across the UK.

Now available for corporate occasions, get in touch with us today and enquire about Only Men Aloud for your upcoming big event.