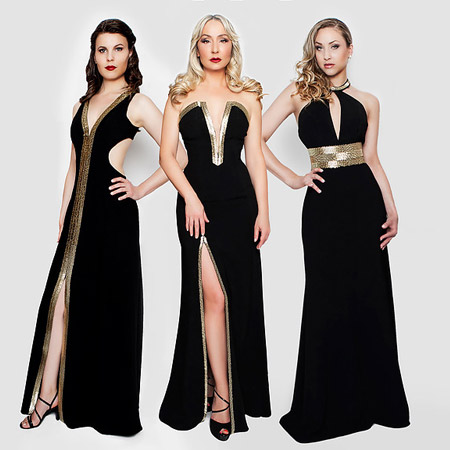 REASONS TO BOOK
Classical crossover group, fusing opera and pop together
One of the most exciting opera pop crossover groups to hit the music scene
Reached #1 spot in Reverbnation Classical charts in Canada & #30 in world
Headlined act for corporate shows such as General Motors, KIA, Alcon
Based in Canada & available to perform at events worldwide
Classical Vocals, Live Music and DJ, Musical Shows, Cabaret and Stage Shows

Our Opera Pop Group contains 3 brilliant voices whose vocal prowess and original compositions features opera, pop, techno and world music with classical high notes while exhibiting their intimate personal style. While “aria” refers to the show-stopping moment in an opera, the “n” stands for “the north” — our Pop Opera Group is proudly Canadian.

Created in the Fall of 2010, with professional opera singer Katya at the helm, it didn’t take long for 1 to become 3 with the addition of fellow opera talents Anna and Erin – thus the pop opera group was born. Since then they have already established themselves as one of the most exciting opera pop crossover groups to hit the musical scene. Their fan base is growing substantially and recently got to #1 spot in Reverbnation Classical charts in Canada and to # 30 the world.

Most recently their success has taken them to Cannes, France to be showcased at MIDEM, international music and technology conference. Naria have also been engaged as the headlining act for numerous corporate shows such as General Motors, in Toronto, KIA in Vancouver, Canada and Alcon Canada in Cancun, Mexico to name a few. They also produced a special event Christmas concert in December of 2011 to a sold out audience of 350 people at the Glenn Gould Studio in Toronto.

" “Visually spellbinding musically: Harmonious & Innovative… A definite one of a kind!” "