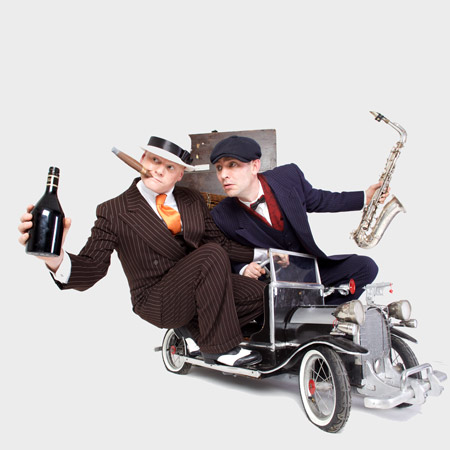 Our fantastic Roaming 1920s Comedy Gangsters bring back the stylistic spirit of the early twentieth century Italian American Mob with a comedy twist. Their highly amusing, occasionally slapstick, comedy act will grab the attention of guests old or young.

Dressed in finely tailored suits, the very elegant 1920s gangsters offer a unique interactive and roaming drive by comedy act in a hilarious miniature car. Their fascinating motor is a replica of a classic early 1900s car and their costumes immediately say Mafia, without scaring guests away.

The Roaming 1920s Comedy Gangsters will choose a spot to hop off their miniature car and deliver some interactive fun with juggling, swing dance as well as comedy capers. They also provide, from within the car, a feel good soundtrack which could be tailored accordingly.

The visually captivating 1920s Comedy Gangsters are the perfect roaming entertainment for all types of events including Summer and outdoor events as it is totally family-friendly fun. Previous clients have included the Newby Hall Gardens, Down Royal Racecourse Belfast and Camberley Car Festival.

Top Tip:
The 1920s gangsters also offer a stage version of their comedy act that will entertain guests at a seated event.

Ask our specialists at Scarlett Entertainment if you would like to book the wonderful interactive 1920s Comedy Gangsters for your upcoming event.