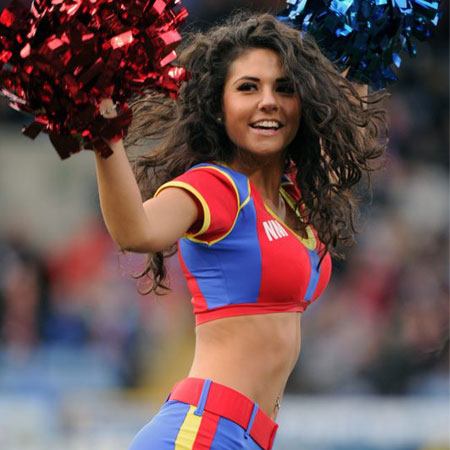 REASONS TO BOOK
Official cheerleaders for Crystal Palace Football Club
Featured in local & national press, over 180 magazines worldwide
Combined YouTube views are over 4.5 million
Girls can dance in their own kit or a bespoke as required
Based in London & available to perform at events worldwide
Sporting, Cheerleaders, Dancers, Sporting Theme, Themed Entertainment

The Crystals are the Official cheerleaders for Crystal Palace Football Club.  The Crystals have only been around for 3 years but their following has gone from strength to strength. Initially with a pre-set fan group for the club the girls now have followers from all over the world and have been featured in local and national press, over 180 magazines worldwide.

The girls were the first "NFL" style cheerleaders in sport in the UK and they have had the most press coverage of any squad in the UK.

The girls have created viral videos on line to grow their fan base and the response has been overwhelming! Their combined YouTube views are over 4.5 million and still rising in just four videos, and their calendar was sold old within 2 months!.

The girls can dance in their own kit or a bespoke as required.