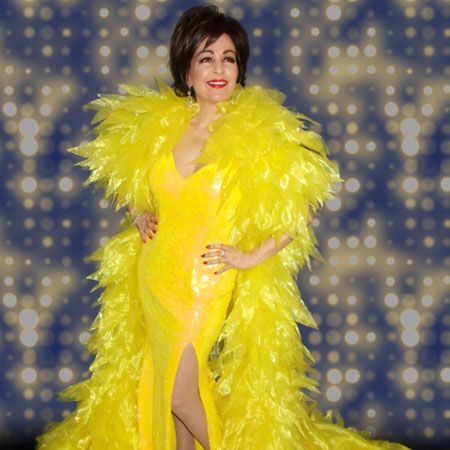 REASONS TO BOOK
Performed at events endorsed by Dame Shirley herself, including the auction of her stage wear at Cafe De Paris in London
Thrilled corporate/private clients in Europe, the Middle East and the USA with performances in over 30 countries so far
Previous clients include BBC, Barclays Bank, Chevron, P&O, Daily Mail, Chelsea F.C not to mention private performances for celebrities
Performed globally for many high profile 007 James Bond events for corporations such as SONY and MGM
Based in the UK and available to perform at events worldwide
Themed Entertainment, James Bond 007, Tribute, Lookalikes and Impersonators, Shirley Bassey

Joanne has been performing globally as Dame Shirley Bassey since 2002 and during the last two decades, she has maintained her recognised status as the most respected and sought after Shirley Bassey tribute act in the business.

She has an incomparable, wealth of experience impersonating Dame Shirley worldwide and this has seen her perform her unrivalled Shirley Bassey tribute show in over 30 countries so far. Her longevity in this field, speaks absolute volumes and she is always the first choice for major, international event management companies across the globe.

See the gowns, the drama and pure sophistication of this authentic Shirley Bassey tribute show. When appropriate and wherever possible (Big Spender & Kiss Me Honey Honey being the playful numbers) Surely Bassey incorporates audience participation into this highly acclaimed tribute to the "Diamond Dame" and her cheeky sense of humour/stage persona is a definite crowd pleaser!

She has performed her outstanding Shirley Bassey tribute show, at high profile corporate events and private celebrity parties, across the United Kingdom, Europe, the United Arab Emirates and America. There have simply been too many glamorous events to list! Be it a private yacht in the bay of Naples, a casino in Prague, a glitzy James Bond event in Monte Carlo or a prestigious corporate event in Detroit, this Dame Shirley Bassey experience always goes down an absolute storm with audiences of all nationalities.

Joanne is a world-renowned Shirley Bassey impersonator, who has also performed at events endorsed by Dame Shirley, including the fabulous auction of her gowns at London’s "Cafe De Paris" Surely Bassey had the honour of portraying the "Tigress from Tiger Bay" whilst singing "Big Spender" wearing one of Dame Shirley’s original gowns – now that is indeed an accolade!

" That was fantastic! I really enjoyed it. It was weird watching you because you have the facial expressions to a tee, especially the sideways mouth! A great job! "

" I thought you were fantastic! Have seen Dame Shirley live myself, I thought you'd mastered her voice and expressions brilliantly! "

" Best at being Bassey. She has got the gestures down to a tee! "

" Yet again, the Shirley Bassey Tribute and her pianist were fantastic. A hit with the crowd and a super compliment to our themed evening. Do pass on my thanks and congratulations on the performance, the feedback has been non stop positive. She looked great! "

" Absolutely stormed it!! Give yourself a big hug for transforming the lobby of the Carlton into a magical cabaret. Gartner were absolutely delighted and I am sure we will be working together again soon "

" Thank you for what can only be described as a belter of a performance. I thought it was Shirley Bassey herself! We certainly made the right choice putting you in the Chairman's restaurant. I hope we will see you back at Chelsea soon "