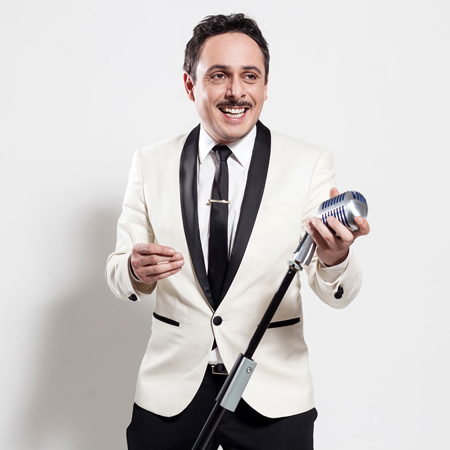 REASONS TO BOOK
A singer who represents a professional figure of a thousand facets
Considered one of the leading interpreters of the American ‘Songbook’
Is among the ten best jazz singers an Italian poll
Often compared to Sinatra, he has built a well-defined style
Jazz Vocalist based in Milan and available to perform at events worldwide
Jazz,Swing,Blues and Jive, Live Music and DJ, Musical Shows, Cabaret and Stage Shows, Italian, World and Cultural Acts, Rat Pack, Tribute, Lookalikes and Impersonators

Italian Crooner Matteo represents a professional figure of a thousand facets, highly regarded internationally; he is the best of the living jazz tradition in Italy.

The multi-talented artist, singer and actor was awarded Best New Talent at the “Elba Jazz Festival” in 2008. Audiences and critics enthusiastically received both his debut and his second album nationally and internationally.

Having performed alongside Michael Bublé in Rome, Matteo is now considered one of the leading Italian interpreters of the American ‘Songbook’ and among the ten best jazz singers in the Italian poll of 2012 voted by the readers of “Jazzit” magazine.

Considered one of the leading interpreters of Italian and American Songbook, this talented jazz vocalist perfectly represents swing and jazz tradition in Italy. He has performed alongside artists like Michael Bublé, Fiorello, Renzo Arbore, to name but a few. Throughout his career, he has performed more than 500 concerts in the most prestigious venues all over the world.

Over the years this experienced and highly professional Italian Crooner has been fortunate enough to work with famous jazz musicians including: Franco Cerri, Renato Sellani, Gianni Basso and Fabrizio Bosso. Often compared to his mentor, Frank Sinatra, Matteo has built a repertoire and increasingly personal and well defined style.

Contact us today and make your enquiry about this amazing Jazz Vocalist!