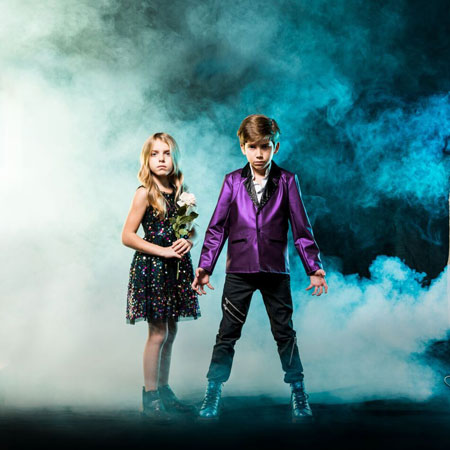 REASONS TO BOOK
The youngest professional magician and illusionist in the world
A kid magic act who made it to the top 14 of America’s Got Talent
Starred in the international feature film Dark Skies alongside Keri Russell
Our child magician and his glamorous assistant have appeared on television in more than 100 countries
Based in Hollywood and available for worldwide bookings
Close up Magician, Illusionist, Magic Stage Show, Magic and Illusion, Child Stars, Children and Family Shows, Family Entertainment, TV Show Talent Acts, Talent and TV Show Personalities

Known for their creative use of everyday objects, witty humour and charming personalities, this kid magic act is taking the world by storm.  Performing illusions that rival experienced and top magicians, our two pint sized magicians captured the hearts of audiences from all over the globe when they made it to the top 14 of America’s Got Talent. Performing a mixture of close up magic and grand illusion shows these two are certainly one to watch as they astound audiences of all ages. A child magician who is highly entertaining, gripping to watch and phenomenal to experience, these two performers will have everyone in the room on the edge of their seats and clapping for more.

The pair have starred in movies, television shows and national commercials, appearing on over 1000 shows in more than 100 countries.  They have also starred alongside Keri Russell in the international film Dark Skies as well as featuring on China’s New Years Live special which reached over 200 million people throughout Asia!

Having performed and appeared on TV shows such as Access Hollywood, Entertainment Tonight, Today Show and Harry Connick Jr’s show these little performers promise a very big impact every time they step on stage.

Combining close up tricks with huge grand stage illusions, there is never a dull moment with this dynamic duo as they appear, disappear, escape, saw each other in half and climb out of tiny brief cases.

The youngest professional magician in the world this act is guaranteed to astound and amaze as they perform highly advance routines that still leave everyone in the audiences wondering how they did it.

To book our Child Magician and his lovely assistant or for more information, contact our Entertainment Specialists.