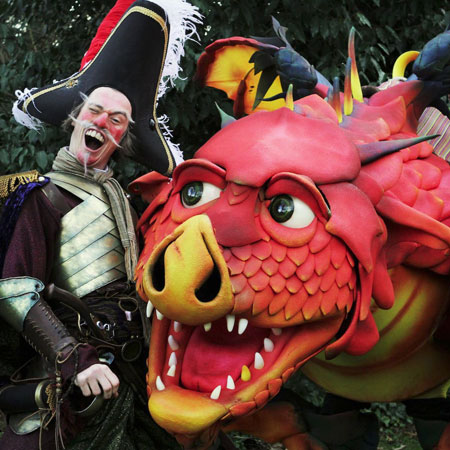 The Show ~ Sir Aurelious Jones gathers a crowd. A golden child chosen by the fates for their courageous heart is selected from the audience. Having passed three tests and won the Golden Breastplate they accompany Sir Aurelious on a Heros Journey, leaving the ordinary world behind them as they re-enact the quest to find and tame the beast! In the Dragons Lair the child must rescue Sir Aurelious from certain death and teach him how to become friends with the dragon. With the cosmic balance restored the child is knighted before leaving the heroic world transformed. At the end of the show there will be a once in a lifetime opportunity for all to get up close and personal with biggest, brightest & most beautiful creature ever seen. You could make friends...but only if you dare!

The Walk-about ~ Epico a colourful & spectacular 5m animatronic dragon (with onboard sound & smoke systems) and Sir Aurelious his adventurer companion perform a localised walkabout. Their fractious relationship is performed in a broad comic style throughout with petting moments aplenty.