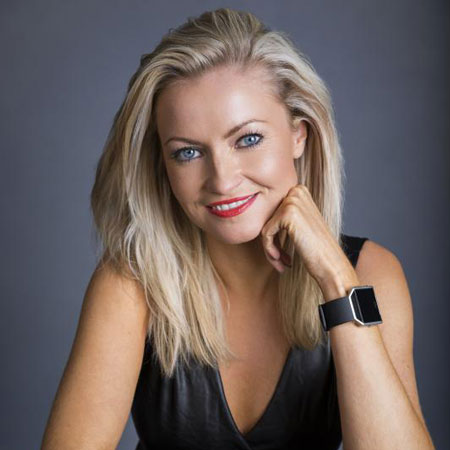 The female host has over ten years global experience as a live event host and presenter and has hosted at some of the most exciting events across the World. From presenting at the Mobile World Congress in Barcelona through to hosting the world-famous Taste of London festival her experience spans across product launches, experiential campaigns, fitness events, fashion shows & catwalks, tech conferences, exhibitions, awards ceremonies, charity galas and pretty much everything in between.

She specialises in entertainment and gadgets and technology as well as consumer affairs, and is a popular choice for brands after a competent and natural presenter for corporate films and product demonstrations.

The English Tech Presenter and Host started her Professional Presenting career in 2007 racking up some impressive credits and working all over the world in the process. Some might say it was the natural path for the girl who was always told off for talking at school.

After graduating with a BA (Hons) in Media & Broadcast Journalism, she started out Producing TV commercials but it wasn’t long before she hopped over to the other side of the camera and landed her first full-time Presenting gig as the Entertainment Correspondent for Channel M. The role saw her interview various top celebrities and putting her producing skills to good use as she also Produced and Presented a twice daily live news bulletin, from there she was asked to screen test for the role of Breakfast Show Anchor where she stayed for two years (SKY 203, Virgin 878) and gave her the chance to rack up 3 hours of Live TV every day, 5 days a week, for two and half years –  the perfect training which helped to shape Nikki’s down to earth, natural and ‘ready for anything’ presenting style. The show covered features as vast as Showbiz news and Celebrity interviews through to Sport, Business and topical news items. She wrote most of her own scripts and researched her interviews that were as varied as the Economy, Keith Chegwin talking about National Chip week or a local artist talking about their latest exhibition. With no two days the same, the role required a great sense of humour, an ability to ad-lib, to think on her feet and react quickly to changes within the programme as directed. Through this experience, she is also very experienced in the use of open talkback and autocue.

The live event host landed her dream role in 2009 as the Backstage Presenter for BBC Strictly Come Dancing where she stayed for six happy series in total.

It wasn’t long before she was snapped up by BBC2 as one of their legendary Gadget Girls for popular Sunday morning Show ‘Something for the Weekend’ where she presented the gadget section from 2010 – 2012 as the Gadget and Retail Expert, reviewing and demonstrating the latest gadgets, gizmos and quirky products in a fun way with Tim Lovejoy and various celebrity guests.

She has enjoyed presenting a variety of Entertainment and Factual features during the Channel 5 series ‘Live With Gabby’ magazine Show.

To find out more about how to book get in contact with our helpful team of experts.