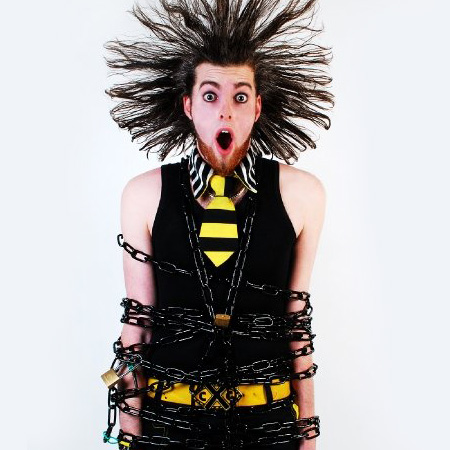 REASONS TO BOOK
Critically acclaimed Comedy Contortionist & Escapologist
One of the top Cabaret & Street performers in the UK
Performed around the world inc New York to Dubai
High profile clients inc Royalty and Global brands
Based in London and available to perform worldwide
Escapologist, Circus Entertainment

Chris is a Stand-Up Comedy Contortionist & Escapologist and is one of the TOP Cabaret & Street performers in the UK. A 5-Star Critically Acclaimed Show that has been performed Worldwide - Suitable for all ages, events and occasions whether it be indoors or out!  Chris is A Popular Choice for Many Corporate Events Worldwide: From London to Dubai, Paris to Bahrain, Athens to Amsterdam, New Zealand to New York!

He has been booked Worldwide by some of the Biggest Corporate names in the World:
Virgin, Exxon Mobil, Microsoft, Diesel Dubai, Thomson, Etc.

Delivering a Show to the specific tailored needs of the booking – whether it is a Product Launch, Promotional Stunt, Advertisement, Launch or the annual AGM, Xmas Party or suchlike - EVEN Customized Escapes and Stunts can be designed featuring YOUR Product, Branding, Logo, Etc if desired!

" Thank-you Very Much for your Entertainment. It was Very, Very Good and a Pleasure for me to have Watched. I Enjoyed your Talent, Thank-You… "

The Prince of Bahrain

" That was SO Amazing! I'm really impressed! I Love you – you're my Favourite! "

" Awwwwww Man – This guy Freaked me Out! One of the Weirdest things I've seen in a long time! He's Funny though and I thoroughly Enjoyed his Whole Act whilst onstage with me at the Press Party for Hard Rock Calling 2011 "

Alice Cooper (World Famous Rockstar: 'School's Out for the Summer', 'Feed my Frankenstein'..)

" I Love Magic but those tricks right there were Sick! I've seen a lot of Magicians and none of them did that Bro! Really Cool Sleight of Hand and so Quick – Wicked! "

" Having Chris support me at The Newcastle City Hall was Great, he got the Crowd Alive and Ready to Rock with his Outstanding Showmanship, Skills and Shining Cheeky Charisma. He is very good at what he does…! "

" Thanks for being at my 50th Birthday Celebrations, the Tricks are going down a treat! "

Boy George (80's Chart-topper and frontman of The Culture Club: Karma-Khameleon, Do You Really Want to Hurt Me, Etc)

" Scary! Those arms aren't supposed to do that! That's Weird, even by my Standards man! "

Sir Terry Pratchett (The Most Surreal Author in the World!)

" Eye-popping and Hilarious in Equal Measure, Chris is One TWISTED Mister "

" We spotted Chris Cross and his own brand of contortion on Myspace; It freaked us out enough that we decided to promote him all over the site. We wish him the best of luck wierding out crowds across the nation! "

" If there was an award for 'Funniest Act of the Weekend', it would have to go to comedian, contortionist and escapologist Chris who could win awards for funniest act of ANY weekend. The multi-talented Geordie brought his act to the middle of a field, literally, on Saturday afternoon and after starting out performing to a handful, had pulled an audience of several hundred by the time he finished…It's difficult to say whether he's primarily a contortionist who uses comedy or a comedian who uses dislocating his shoulders as an act. Chris has a natural, easy style (not to be mistaken for unrehearsed) and builds a rapport with an audience with the ease of someone whose been performing much longer than his age (21) would suggest. He has one liners and put downs a plenty and isn't afraid of challenging anyone within a 50 yard radius of his show - this is real street performing art at its best.He performs several contorting tricks that involve dislocating his shoulders and get increasingly stomach churning as the show progresses. Using your own arms as skipping ropes is both impressive and nauseating at the same time and he finishes with an escape from a straight-jacket just as the audience count down to one. Contortion and escapology might seem a bit like a Saturday evening end of pier show. Until you've seen how well Chris does it, don't be fooled. "

" Chris is a contortionist and escapologist - I seem to remember a few freaky tricks involving dislocated shoulders and a strait-jacket in there somewhere - but his real skill is in creating an atmosphere of complete lunacy which infects your mind and leaves you questioning wether then sane world really exists.To say he is a natural showman is a gross understatement - the 19 year old has already been a street performer for a decade and appeared on Britain's Got Talent, and can handle an audience like a piece of putty. His body bending stunts merely provide a vehicle for a comedy act that's as slick as it is screwball, delivered in an outrageous, Russell Brand-esque persona. An hour later his audience stumbled back upstairs from the cellar, some of them vowing never to speak of what had happened. "