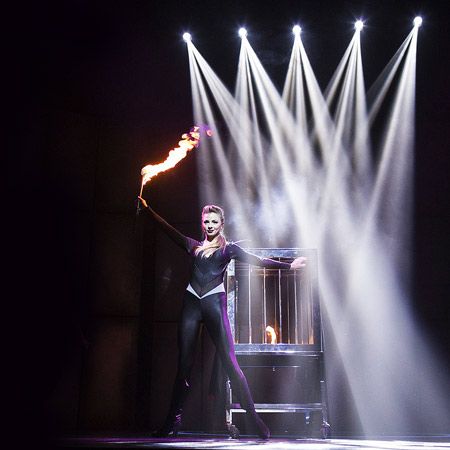 REASONS TO BOOK
Spectacular world leading female illusionist with death defying stunts
Incredible custom made illusion shows with guaranteed wow factor
A Britain’s Got Talent semi-finalist also seen on The One Show and The Next Great Magician
Clients include Prince Albert of Monaco, the NHS and the Anthony Nolan Trust
Based in London and available for events all over the world
Magic and Illusion, Illusionist, Magic Stage Show, Cabaret and Stage Shows, Magic and Illusion Show, Talent and TV Show Personalities, TV Show Talent Acts

Our High Profile Female Illusionist delivers spectacular death defying stunts as well as mind boggling illusions that will have your guests completely mystified and on the edge of their seats. Successfully reversing the gender roles of old traditional magic shows, our sensational female magician take centre stage with her wow factor stage magic illusions.

The world leading female illusionist performs stage magic on a grand-scale and fantastic illusions that have sent her to the very top of the league. Her acts include the likes of the Table of Death, stunning levitations and unbelievable escapology routines that have everybody holding their breath in suspense. Our High Profile Female Illusionist is a Britain’s Got Talent semi-finalist who has become the most talked about woman in magic.

This female magician started her career working alongside master magician Hans Klok. Together they successfully broke the world record for the largest number of illusions to be performed in five minutes,  an achievement that remains unchallenged to this day.

The world-class female magician has performed for audiences of thousands, from Prince Albert of Monaco to Stella McCartney and Jermaine Jackson. She has appeared on the BBC's The Magician and The One Show as well as ITV's The Next Great Magician. Her work has also led her from the stages of London's West End to hundreds of European theatres and arenas.

The stage magic show can be tailored to suit the client and event and you can guarantee that this female illusionist will produce a jaw dropping spectacle that your guests will not forget.

Please contact our team at Scarlett Entertainment if you would like to book our stunning High Profile Female Illusionist for your special event.