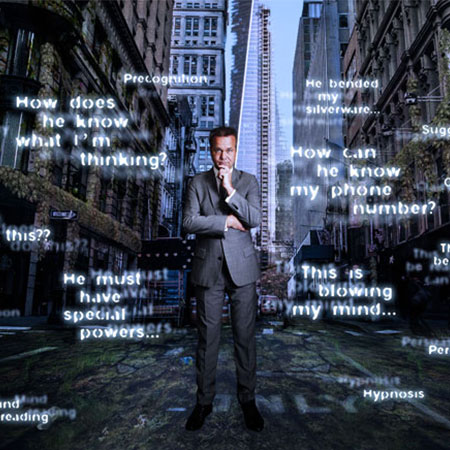 Richard is a professional magician and mentalist from The Netherlands. Since beginning his career in 1990 he has appeared on ‘Holland’s Got Talent’ 2011 and performed at private and corporate events around the world for countless celebrities and VIPs. He also hosts his own regular mentalist show on Dutch TV.

Richard offers a number of different magical acts which can be tailored to suit your specific events needs: magic theatre shows, dinner shows, mix and mingle magic, children’s shows and workshops. Whether presenting an elaborate stage show filled with special effects, jaw dropping stunts and plenty of audience participation or performing incredible sleights of hand right under your guests’ noses, Richard knows exactly how to captivate and engage his audience.

Internationally acclaimed, our talented magician and mentalist has amazed audiences in more than 18 countries around the world. Based in the Netherlands and a regular face in Dubai, Germany, France, Spain, the United Kingdom and Belgium, Richard’s previous clients include A-list celebrities, renowned companies and even royalty! With a well-deserved reputation, he is known as 'the Gentleman of Magic'.

His performances are the result of a century of magic theory, live theatre experience and his utterly unique style. His shows involves lots of audience interaction: every show can be tailor-made to suit your specific requirements, ensuring this way the success and memorability of any event. Whether it's a wedding, a private party, a charity event, a corporate party, a trade show or a product launch, Richard's performance will always leave lasting memories.

A highly experienced performer, Richard provides professional entertainment for your event; his number one rule is that each private event is kept as secret as his magic!