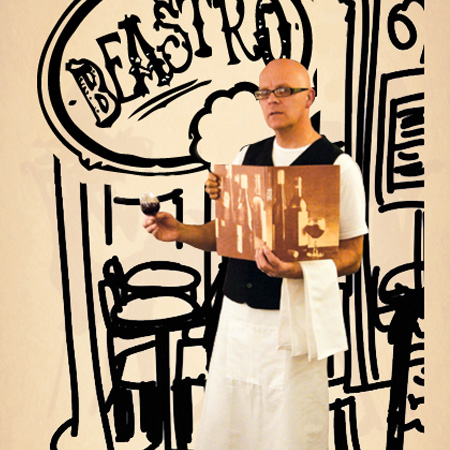 Award winning comedy artiste Wayne has been a performer since 1979 and a comedy speciality act since 1995, with over 3,000 shows to date.

First and foremost a silent comedy act, whose timing is renowned by his peers throughout entertainment. Add to this his skill in performing magic and illusion which leaves his audience baffled.

The show has a very Parisian and French feel to it. The stage is set with a Victorian street lamp and immaculate dining table underneath, set with white cloth and diamond encrusted lamp which looks stunning. The theme of the show is the waiter setting the dining table for the arrival of his special lady guest. Along the way what can go wrong, will go wrong, and often does with a great comic twist!

When she finally arrives and takes her seat at the table, this funny act delivers a first class performance whilst singing "Be our guest" from the musical "Beauty & the Beast."

Available for TV with his 6 minute routine. As a standalone cabaret show up to 45 minutes, or part of a main theatre stage show as 2 x 15 minutes, can perform in a restaurant in between courses in 10 minutes segments or even at a private dinner party.

As the act involves no speaking there is no language barrier for the people who will be attending your event.  You can also add his "spoof comedy waiter" to your event.

" The most inventive and hilarious comedy idea I've seen this year "

" The Comedy/illusion act is a classic routine in the making "

" This is something very special indeed. A WORLD class specialty act that really is a cut above "

" A memorable show charged with humor and suspense..Warranted a season at the London Palladium "