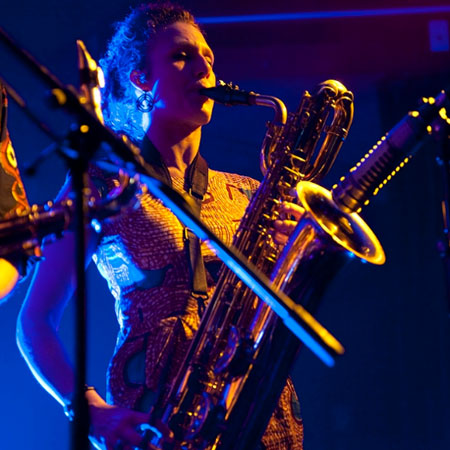 This hugely versatile saxophonist performs a wide variety of musical styles including a mixture of chill out, downtempo electronica, funk, Latin and afrobeat.  Since graduating from the Guildhall School of Music & Drama in 2000 Tamar has been working as a freelance saxophonist (order of preference: Baritone, Soprano, Tenor, Alto) and multi-wind specialist (clarinet, flute and related instruments such as alto flute, piccolo, bass clarinet).

Tamar works in a wide range of fields including theatre (most recently FELA! at Sadler’s Wells and the National Theatre, London), TV (house band for Chris Moyles Quiz night and X Factor Big Band Special), and improvisation with DJ’s (for which she generally use tenor sax and occasionally flute).

This talented and stylish sax player has performed around the world for high profile clients and is hugely popular amongst the Jet Set, as well as celebrity parties!

Tamar has performed with the fantastic German/Indian group TAAL TANTRA in Kolkata in 2005, playing at the JAM’SAHEL 2007 in Paris, and improvising with fire-dancers in Bangladesh.