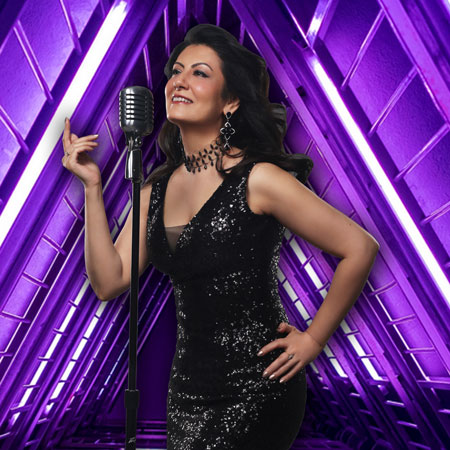 REASONS TO BOOK
Energetic and interactive performances with audience participation for weddings, mehfils, festivals, melas, corporate shows, parties and more
Perform a versatile and immense repertoire of popular classics, new Bollywood hits, selected Bhangra and English songs
The only Bollywood band in the UK to have performed at Diwali on Trafalgar Square celebrations four years in a row for over 30,000 people
Performed with several well-known Bollywood film industry singers including Indian Idol, Salman Ali at Wembley Arena
Have performed over 1000 shows nationally and internationally. Based in London, UK and available for shows worldwide
Indian and Bollywood Music, Live Music and DJ, Bollywood and Indian, Themed Entertainment, Indian and Bollywood, World and Cultural Acts

A dynamic 8-9 piece band who deliver the highest quality of Bollywood music in power-packed performances, bringing together influences from the Bhangra, Bollywood, Urban and World Fusion music circuits.
Featuring lead singer Shama, who has previously toured in South America, the Caribbean, West Africa, Dubai, Europe and the UK.  She has performed with artists from the Bollywood music industry like Anup Jalota, Sukhwinder Singh, Nitin Mukesh and Mangal Singh.  Shama is also the only UK artist to have performed at the prestigious Diwali on Trafalgar Square celebrations 4 years in a row. This event attracts crowds of over 30,000 each year.
Apart from regular band life, the band have also supported well known UK artistes such as Navin Kundra, Shin DCS, Taz Stereo Nation, Mangal Singh, Channi Singh (Alaap) and in the upcoming weeks, will be supporting the Indian Idol finalists in a series of concerts.
With a highly professional approach, flexibility to deal with any audience and an equally impressive repertoire of songs, this band will definitely leave your guests wanting for more!

3 singers, 6 musicians: Keyboard, Drummer, Lead Guitar, Bass Guitar, Indian Percussion, Octapad Player, Sound Engineer
The band covers a huge repertoire of songs from Bollywood to Bhangra, and some selected English songs too! Performances include mehfils, dinner & dances, stage shows, melas and corporate shows. This group are based in the UK and are available for international bookings.
Shama, born in Libya, is very much attached to her Indian roots. A versatile and capable singer, who has been performing since childhood to audiences around the world.  Having received her vocal training from Smt. Swati Natekar and Smt. Krishna Chakraborty, Shama went onto developing her own voice and style.
Shama is the only Asian female artiste in the UK to have had two successful long-running bands. She became a brand name in 1994 as she set out with the popular Shama and Friends band, wowing audiences in South America, Caribbean, West Africa, Dubai, Europe and nationally over the UK for the next 15 years. Her second band has been performing and producing music since 2009.  In 2010, Shama made her debut as a lyric writer, penning the words to Maahi, the very first track released by 515 Productions, quickly followed by Diljaani, Baarish and Jogan. Shama’s single, Jogan went straight into the iTunes World Music Top Ten on the very first day.

" Shama and her band deliver more than just a show – the clarity of vocals and passion in their performance left both us and the audience wanting more. The stand out highlight of Bollywood Fever 2015 was having Shama and her band 'wow' those present, set against the perfect backdrop of Bargehouse, Oxo Tower Wharf in the heartland of London's cultural district South Bank. Polite professionalism, whilst being able to perform to an expectant audience is a rare commodity in the entertainment industry, however Shama and her band achieve this in abundance. "

" Once again you guys were amazing at the KMK Mehfil Night on 25th April, one of the most popular event organised by Kutch Madhaapar Karyalaya. Everyone loved it! Lots of compliments from the audience. Very talented group of musicians & singers. Fantastic job of getting everyone singing along. Cannot thank you enough. What I like most about you Shama is that you are very easy to approach & you understand what we want and we cannot wait for you to perform again for us!! "

" Shama and her band were exceptional in making my wedding reception a night many of us will never forget.Being passionate about live music, I was adamant that the evening’s entertainment had to centre around a band and I was not left disappointed. The music was exceptional, diverse and energising which had everybody on their feet. Shama, Chirag and Nimesh were versatile singers who played to the crowd changing the tempo when required. Whether it was a Bollywood classic, a dance track or a Michael Jackson classic, they had everything in abundance.It was a joy to have had such talented singers and an outstanding band at my wedding reception. It is a night that my friends and family still talk about and want to re-live again simply because of the flawless entertainment present in Shama, Chirag, Nimesh and the band. Collectively they had such a unique offering and I have no hesitation in recommending them. "

" Shama is a versatile singer with an ability to sing all styles of Indian music. Shama and her band's music combines both traditional Indian melodies with modern production and are great for the dance floor as well as just to listen to . I congratulate them on their music. "