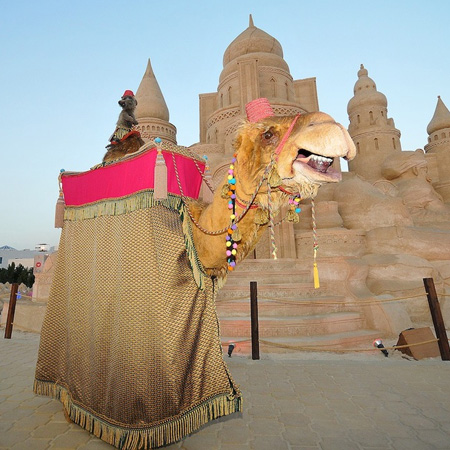 Meerkat and The Camel

Reasons To Book
Animatronic puppetry and creature based Walk-around Characters
From deep within the desert rides Prince Amir the Meerkat atop a Camel
Previous clients include BBC, Coca Cola, BP, No 10 Downing Street
Guests can have a photo with these colourful comic characters
Based in the UK & available to perform at events worldwide
Themed Entertainment, Arabian Nights, Walkabout Entertainment, Walkabout Animals, Walkabout Characters, Family Entertainment, Family Walk Around Acts

Meerkat and The Camel VIDEOS

Meerkat and The Camel PHOTOS

Animatronic puppetry and creature based street entertainment. From deep within the desert rides Prince Amir the Meerkat atop his trusty companion, Nazreddin the wise old Camel. Come forth and witness the miniscule majesty of Amir and the curmudgeonly Camel who will laugh at anything... especially himself!

You are sure to join in with the jolly japes as Amir tries with varying success to steer the lazy beast onward whilst maintaining his inflated ego. Be certain to step forward for a photo with these colourful, comic characters and take home a memory of the Middle Eastern magic on show.

" The Camel has been the star of the show "

Idea Articles Related To Meerkat and The Camel
See More