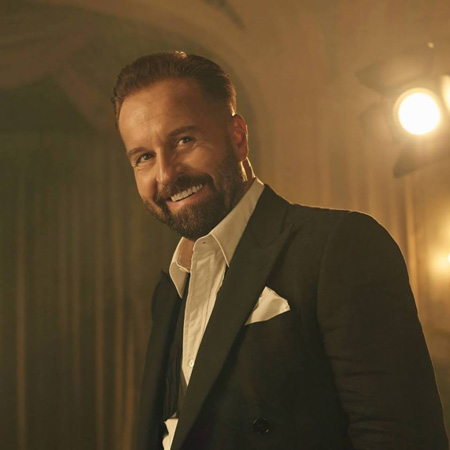 REASONS TO BOOK
Discovered whilst singing at work in a Lancashire car factory, Alfie Boe is now one of the best-loved vocalists of his generation
Effortlessly breaking the boundaries via his love of music, from acclaim on the great opera and West End stages to major chart success
Starred in hit Broadway and opera productions such as La Boheme, Carousel, Les Miserables
Sold over 1 million albums in the UK in the last 18 months and has celebrated Double Platinum status on his album with Michael Ball
Alfie Boe is based in the UK and available for worldwide bookings
Live Music and DJ, 1920s and Vintage Music, Talent and TV Show Personalities, Famous Musicians,Bands and DJs

Alfie Boe has sold over 1 million albums in the UK in the last 18 months. His exceptional voice has cemented him as Britain’s biggest-selling, most popular and best-loved vocalist of his generation.

Famously discovered whilst singing at work in a Lancashire car factory, Alfie's journey has propelled him from operatic roots at the Royal College of Music and Royal Opera House, straight to the Broadway boards when he was chosen by Baz Luhrmann to star in his 2002 revival of ‘La Boheme’, for which he won a Tony Award.

Alfie Boe returned to the stage and the London Coliseum last year to star in Roger and Hammerstein's 'Carousel'. As accomplished in leading the cast of Les Miserables as Valjean in the West End production (including the world famous 25th Anniversary performance at the O2 Arena in 2010) as he is stealing the show at Her Majesty The Queen’s 90th birthday celebrations at Windsor Castle.

Alfie commercially celebrated his second number 1 album with Michael Ball on 2017’s ‘Together Again’ after 2016’s ‘Together’ reached Double Platinum status and became the Christmas number 1 in the UK. The return of the pair in 2017 saw also another sold-out arena tour and their second one hour ITV Special, and saw the winning of 2 Classic BRIT Awards in 2018 for ‘Classic FM Album of the Year’ and ‘Group of the Year’.

Effortlessly Breaking Boundaries Via His Love of Music

In the Summer of 2018 Alfie was warmly welcomed back to his hometown and performed to over 8,000 people in his Homecoming show at Fleetwood, the latest triumph for an artist who has effortlessly broken the boundaries via his love of music, from acclaim on the great opera and West End stages to major chart success.

Alfie Boe's latest album As Time Goes By was released in November 2018 and he has just completed his first solo tour for five years, including a performance at the stunning Royal Albert Hall in London.

At Scarlett Entertainment we are proud to offer a varied roster of celebrity talent, To find out how to book Alfie Boe and other celebrity singers, bands and DJs for your special occasion, contact our expert team today.