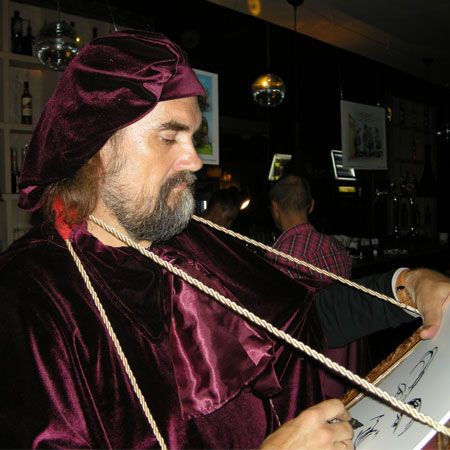 On-The-Spot Caricatures are a guaranteed crowd-pleaser and provide great entertainment, a truly memorable way to remember your company and the function!  Nikolay is one of the finest caricaturists working in Russia. Combining awesome artistic skills with a friendly, professional persona, he expertly captures your guests’ features onto paper.

Caricaturist Nikolay was twice Guinness record-breaker in quick caricatures and winner of many Russian and international contests.  Nikolay can create 30-50 portraits in 1 hour, taking between 30-60 seconds for one client.  He has worked for many high profile clients and celebrities in Russia and appeared regularly on Russian television.  Based in Moscow, you can book caricaturist Nikolay for your corporate event, private party, wedding or exhibition throughout Russia.

" The best caricaturist in Moscow! I really recommend him! You are very talented- instantaneous almost with one line you deliver individuality of people. It was pleasant to work with you and observe this magic! "

" Thank you very much, the Caricature you did of me is beautiful! "