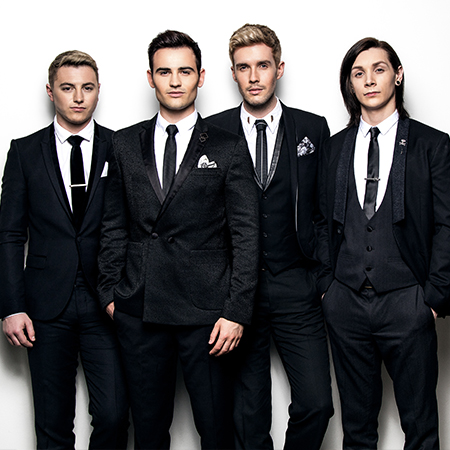 Winners of Britain’s Got Talent in 2014, Collabro’s debut album 'Stars' went to No.1 in the UK and subsequently achieved double gold sales. Loved in the UK as a firm audience favourite, Collabro are continuing to win fans across the world with international tour dates including the US, Canada, Japan and beyond. As the UK’s first ‘musical theatre super-group’, this hugely talented and dynamic group can perform diverse repertoire to include swing, Ratpack, pop hits and more.

They’ve performed at The Royal Variety Show (alongside Dame Shirley Bassey, One Direction and Alfie Boe) and over recent years they have sold out the Royal Albert Hall, London Palladium and performed at prestigious events including headlining the British Summer Time Family Day in London’s Hyde Park, BBC Proms in the Park Glasgow, the ‘VE Day 70’ concert and at the England Rugby World Cup ‘send off’ concert at the 02 Arena in London alongside Take That. Their second album, Stars entered the UK charts at No.2 and their first independent release Home marked their third top-10 album in the Official UK Charts.

Alongside their own very successful touring activity they have also recently appeared on tour as special guests with the likes of Cliff Richard and Barry Manilow in the UK and have made their headline debut in Europe, including a sold out show in Amsterdam.The latest album Road to the Royal Albert Hall also celebrated top-20 UK chart success and saw the group embark on an impressive 50+ date of the UK in 2019 alongside a return to Europe and Asia.

To book Collabro, speak to our expert team or to see other acts you might be interested in, explore our Live Music and DJs section.