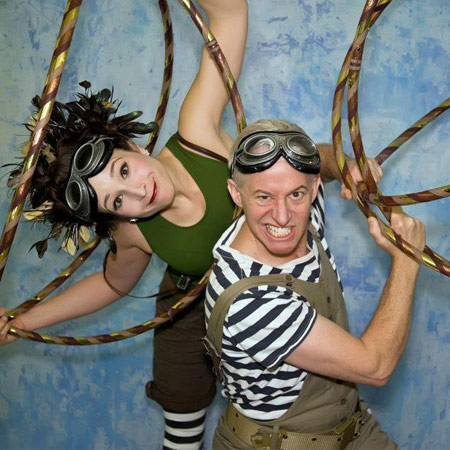 The Comedy Juggling Stunt Show is a Los Angeles based two person comedy show that will rip you a new laugh hole and that the Seattle Times said, “... provides a near riotous end to the show.”

The hilarious comedy duo spin giant metal cubes, breathe fire, do contortionist backbends and whip crack the crowd into a frenzy. From the first moment you notice them you will be captivated as the delight is infectious and the humour is universal.

Onstage the show is magic, but after and between shows the magic continues as these indefatigable entertainers find every opportunity to mingle and perform in any available space. Stage or street, indoors or outdoors, stadium or nightclub, your entertainment dollar is well spent.

The hilarious duo constantly change their series of routines, patter, physical impossibilities, unbelievable situations and audience interactions. There is such a wealth of material available to these performers that they can readily adapt to any change in audience or situation.

" It was dangerous. It was exciting. It was funny! "

" Fantastic. Captivating. You're funny. I was sucked into this thing. It was wonderful. I can't wait to see more! "