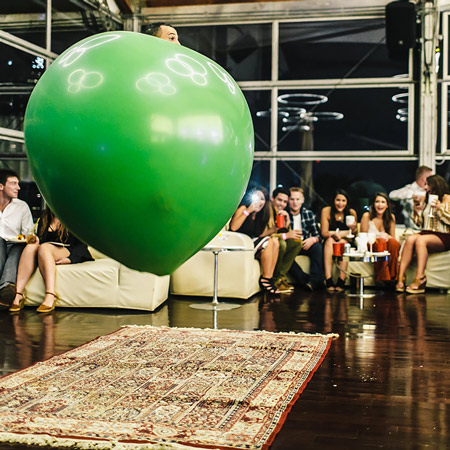 REASONS TO BOOK
Hilarious show with an acrobatic performer and a giant 6ft latex balloon
No language spoken and can appeal to audiences of all types
Fascinating giant balloon act seen on Arabs Got Talent
Customisable act can feature a balloon colour of choice, costumes that fit an event theme
Based in Dubai and available for events all over the Middle East
Walkabout Entertainment, Street Theatre, Speciality and Novelty Acts, Comedy Act, Sphere Acts, Unique Acts, Talent and TV Show Personalities, TV Show Talent Acts

The Dubai Human Balloon is a hilarious acrobatic comedy entertainer with a superb short performance that appeals to all audience types. The very intriguing visual comedy act will have your guests on the edge of their seat anticipating what will happen next as well as bursting into laughter at the comedy entertainer's silly antics.

The Dubai Human Balloon act has been seen at events all over the Middle East and even competed on Arabs Got Talent. The visual comedy act involves our energetic comedy entertainer entering a giant 6ft latex balloon in a comical style and bouncing around the stage before bursting out full customed in a new outfit and singing a song.

The seasoned comedy entertainer offers a variety of acts and knows exactly how to provide fun shows for audiences of all types. This particular visual comedy act uses no spoken languages and is therefore accessible to audiences all over the world.

The Dubai Human Balloon can fully customise his act and is able to do the show with a balloon colour of choice, He can also wear costumes that fit an event theme and a song finale and second costume to suit the client or event.

This brilliant comedy act has mass appeal as well as fitting most event types. The show can take place either indoors or outdoors.

Get in touch with our team of experts at Scarlett Entertainment if you would like to book the  Dubai Human Balloon for your event or party.