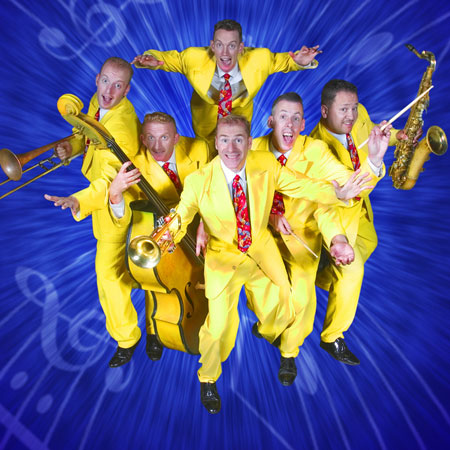 This act are the UK’s top Jive & Swing band. Together for over 10 years, this extremely popular six piece group have performed at thousands of festivals, theatres and dancehalls throughout the UK, Europe and USA, as well as Japan, Israel and the Caribbean. The band are renowned for their high energy Jump Jive music (the exciting sound where Swing meets Rock ‘n Roll) and spectacular stage show and made it through to the S/final stages of Britain's Got Talent 2012.

" Back by popular demand for an incredible fourth year at Montreux, their explosive live shows have become legendary. "

" I wanted to take a few minutes to write a note of personal thanks for the amazing contribution you made to the Children In Need event on Friday. I was extraordinarily impressed not just by the professionalism which you exuded on the night, but also by the willingness to work within the often very strange demands of television. I'm not sure if you have had the chance to see the result on television, but you looked and sounded great. "

" The band entertained 200 delegates from all over the world at the Welcome Party that kicked off the Variety Children's Charity Annual 5-day International Convention held in May at The Royal Lancaster Hotel, London. As usual, the band was fantastic and provided the Convention with a sensational opening. "

" The show has the most important ingredients: It is musically brilliant, it is great to listen to, songwriting is exceptional, and the arrangements of the covers are superb. The band really are a band of very talented musicians. "

" The band are the most dynamic and talented band I've seen in many years...and the ONLY ones I have ever seen with the energy and magic on stage of my parents, Louis Prima and Keely Smith, had during their shows. I am a HUGE fan. "

" These professional young musicians came on cold to an early evening audience and were simply sensational. The band manage great freshness yet maintain an authentic accurate sound. Full Marks. "