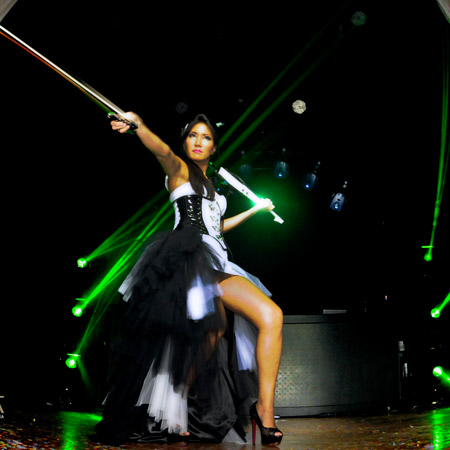 REASONS TO BOOK
Gifted Electric violinist - performing classical or electric violin
Repertoire incl classical, flamenco, Argentine tango, Irish and Latin bossa
Winner of "The Genius of the Violin" contest in London
Offers a violin electronic chill out show with a Belly dancer
Based in Spain and available to perform at events worldwide
Live Music and DJ, Electric Strings

The gifted electric violinist is base din Spain and began studying the violin at the age of 8 where her musical talent was encouraged by Philip Lewis (concertmaster of Calgary Philharmonic-Dallas,Texas). She studied solo performance, music composition, conducting and musical theatre at the Mozarteum Academy (Salzburg, Austria), the Southampton University (UK), the South Oregon University (USA) where she received a scholarship, and the Limerick University (Ireland).

During this time, she has been actively playing with various professional orchestras in the US, Spain and Europe. She also enjoyed playing for musicals such as 'Guys and Dolls' and 'Chaplin' - to which she also contributed to the composition. Also she worked as a theatre musician for various social occasions.

Her education mainly lies in classical music but during the past years begun to explore folk music, starting with Irish traditional music for which she has been bestowed with honours in the Genius of the Violin Competition in London. Romanian Gypsy music is another style to which she has turned her considerable talents. Her curiosity for Gypsy music led her to the acquaintance with flamenco music and the talented guitarist Emilio Maya in Granada, Spain.

Her electric violin show is ideal for events which demand dramatic, classical entertainment with added wow factor!  This stunning and highly trained musician has been booked to perform for high profile clients and at festivals throughout Spain. Based in Granada, Spain her range of musical genres include Classical, Flamenco, Electronic, Argentine tango, Irish and Latin Bossa.

To find out more about how to book our electric violinist Spain contact our team of Entertainment Specialists.