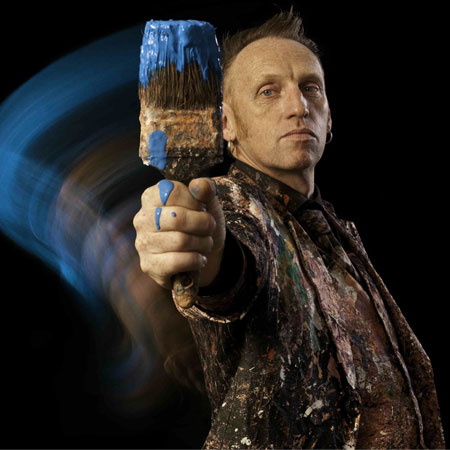 Book our fantastic speed painter for a dynamic and dazzling performance of live artistry like no other. Our event painter creates jaw-dropping artistic masterpieces in mere minutes, right before your eyes.

His vast range of paintings includes famous portraits, city landscapes and much more, and our live event artist can perform bespoke pieces tailored to any event or theme of your choosing. Guests will be hooked as our speed artist creates stunning and vibrant pictures whilst they watch, in a dynamic act that is full of raw energy, making him a magnetic and highly entertaining performer. For a stylish and passionate live art performance full of rock n roll attitude and stunning artistic talent Speed Painter Jon is the perfect choice.

Our charismatic and versatile speed painter offers a range of dazzling acts to entertain audiences at events ranging from corporate functions to PR stunts, festivals and street events. His iconic portraits are a popular choice of entertainment as our speed artist creates stunning likenesses of famous faces in just a few minutes. Our live event artist paints the canvases upside down so that the final reveal of the finished piece never fails to wow the crowd.

This event painter performs with a wit and energy that make his routines mesmerising to watch. Our acclaimed speed painter has performed all over the world including at Glastonbury festival and for major companies like MSN, BMW, Disney and Toyota. Jon’s high octane live art act is set to kicking rock music and promises to be a thrilling and unforgettable entertainment spectacle like no other.

Scarlett Entertainment offers you a fantastic selection of art based entertainment for events worldwide. Contact our team to arrange booking.

" Your performance is awesome "

" Your shows were fabulous and drew large crowds which made a fantastic atmosphere in the town square... thank you very much for your professionalism and hard work. "

" We were delighted to see you and the map featured in colour by The Times and The Independent, and also by The Guardian and on the local BBC and ITV news programmes. "

" … it really gave arts and culture a much needed boost to what people think is public art and it was exactly what I wanted it to do. "

" we were delighted... adding such an imaginative visual art dimension to our programme "