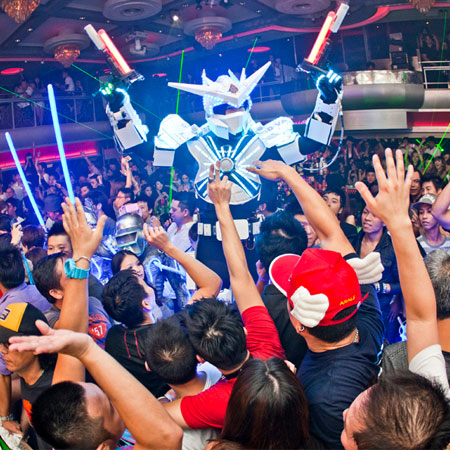 The Human Robot Show is the latest and most unique entertainment concept that has taken the electronic music and Taiwan clubbing scene by storm!  This “Robotic Experience” is something no one will ever forget! The robot is fully autonomous and reacts there and then to what is going on around it, your guests will be amazed and entertained at the same time!

The Human Robot Show can be changed to meet your needs, your branding logo can easily be put on their armors for maximum exposure. There will be a light behind your logo, so people can see it from a distant, even in the dark. The robots can dance, sing, and the most important thing is they know exactly how to entertain people.

This world leading Robot show has several series of giant mobile robots who can not only perform on the stage but also walk though the audience and interact with the VIPs. At dark, massive sparkling LED lights change with music and the Robot can be weaponed with CO2 guns, light saber, laser, and dazzling fireworks. This Human Robot will definitely rock your party!