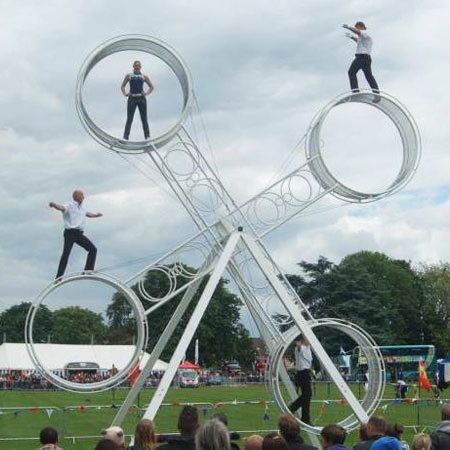 REASONS TO BOOK
Dangerous and spectacular - One of the best aerial stunt acts in the world
Double and triple wheel of death display standing a spectacular 50ft high
A huge crowd puller and will keep your visitors completely mesmerised
Performed at prestigious events inc Bahrain F1 and The Queens Golden Jubilee
Based in the UK and perfect for Festivals, Air Shows and Corporate Events...
Cabaret and Stage Shows, Stunt Shows, Speciality and Novelty Acts, Stunt Act

This is one of the best aerial stunt acts in the world, double and triple wheel of death display standing a spectacular 50ft high, which can be seen from all corners of your event show ground. This arena display is a huge crowd puller and will keep your visitors completely mesmerised.  This unique act is appearing in Great Britain for the third year running on the outdoor arena entertainment scene, having made its opening debut at the Glastonbury Festival in 1995.

One of the most prestigious acts on the circuit today, it is the only Triple Wheel known to be in existence and is an 11 meter structure which rotates on a central axis with a cage at the end of each axial. They enter the cages and commence to rotate the wheel at an ever increasing speed, walking, then running on the inside, then on the outside of the cages.

For those who remember the old 'Double Wheel of Death', which dominated the outdoor entertainment scene for seven years; will realise that this is an even more dangerous and spectacular act and one which will leave the crowd with their hearts in their mouths throughout, particularly when the artistes walk blindfold on the outside of the wheel.

The wheel is available as the 'Double Wheel of Death', or as the one of a kind 'Triple Wheel Spectacular' both acts are well suited to the outdoor arena, being constructed of stainless steel, it is highly effective in sunlight.

Available for main arena events throughout the UK including:

​To WOW your guests with this jaw dropping show , get in touch with our specialist team.